Home » Topics » Academics » Dr. Brian Lane wants you to know how and why the sun will go away for a bit Aug. 21 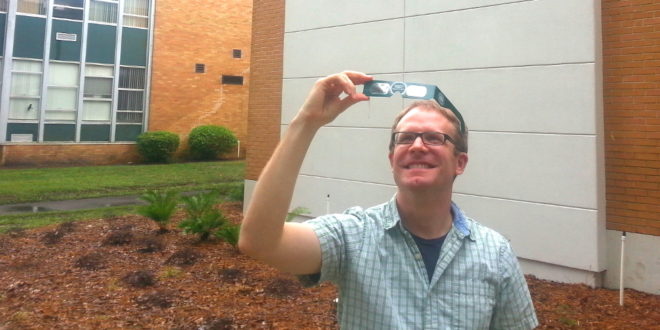 Dr. Brian Lane wants you to know how and why the sun will go away for a bit Aug. 21

In case you haven’t heard, the sun is still on schedule to disappear in less than three weeks. And Dr. Brian Lane isn’t about to let anyone miss it.

The Physics professor has been all over the papers and TV explaining just how the “Great American Eclipse” will go down Aug. 21, and he’s also in the middle of a run of free presentations on the rare vanishing act at Jacksonville Public Library branches.

Lane will deliver a special program about this spectacular total eclipse event to students at Holy Family Catholic School in Baymeadows Aug. 14. And he’s the live on-set expert for WJXT TV-4 on the day the moon casts its big shadow.

Why such widespread outreach?

“Jacksonville won’t see a solar eclipse of this magnitude again until 2045,” said Lane. “I’m glad to know how I’ll be celebrating my retirement.”

In a total eclipse, the moon moves across the sun and completely covers it for a couple jaw-dropping minutes, causing total darkness in the middle of the day and leaving only a corona circling its edges.

For this next one, a 70-mile-wide swath of America from Oregon to South Carolina will be in the “path of totality” – complete darkness with stars visible. The last such event coast to coast in the U.S. was a century ago. The next isn’t for 28 years.

In Jacksonville, we’ll be able to see about 90 percent of the sun’s light eclipsed from about 1:15 to 4:15 p.m., with visibility subject to weather, Lane said.

“Although less impressive than totality, this will still be a wondrous sight to behold,” he said.

Using funds from the JU College of Arts and Sciences’ Physics Department for the “outreach opportunity of a lifetime,” Lane ordered 2,000 special JU-themed solar safety eclipse viewing glasses from American Paper Optics, some for use by Holy Family Catholic students and the majority available for free at any Jacksonville Public Library branch. After that supply quickly ran out, he ordered another 4,000.

“Eclipses are an excellent opportunity for people who aren’t professional scientists to participate in a unique scientific event. With a pair of solar glasses or a pinhole camera, anyone can watch a unique interaction between our two most influential neighbors in space,” Lane said. 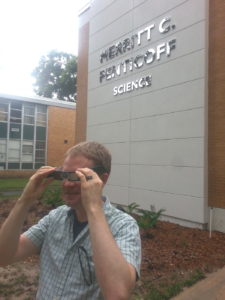 “Solar eclipses are also significant opportunities for scientific research, since the moon offers us a brief window to observe the edge of the sun. They have been key to learning about the sun’s outermost layer (including when it spews matter into space), examining what the sun is made of, and even confirming general relativity by observing starlight bend around the sun.”

And, while it should go without saying by now, “An eclipse is also a nice simple proof that the earth is a round object that moves around the sun,” Lane added.

Lane’s final library talk is at 3 p.m. this Saturday, Aug. 12, at Highlands Regional Branch at 1826 Dunn Ave. His presentation highlights NASA’s Global Learning and Observations to Benefit the Environment (GLOBE) Program (https://www.globe.gov), a citizen science and education program that among other things is coordinating data collection to measure and study atmospheric changes during the eclipse, and the California Academy of Sciences’ study of the changes in wildlife behavior during the event.