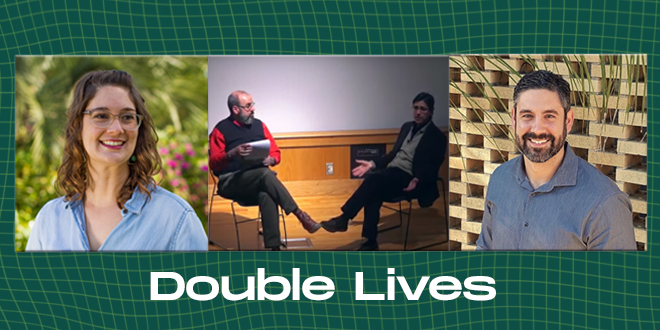 Double Lives: Three Professors Making a Difference On and Off Campus

Jacksonville University professors often use their time outside the classroom to break into other industries, refine their talents, and impact the world around them. Meet three JU professors who make a difference off campus and in the lives of their students.

Professor Lily Kuonen, Associate Professor of Art and Foundations Coordinator, opened a solo exhibition titled PLAYNTINGS: Works Surfaced in The Contemporary Gallery of Georgia Southern University in Statesboro earlier this year. Her “playntings” are a combination of a play and a painting, in which she is both artist and playwright.

The result is a varied and playful approach to contradiction, opposition, integration, and connection. Professor Kuonen enjoys making hybrid combinations using painting, drawing, text, installation, and site-responsive sculptural constructions. Recently, she traveled to Alamosa, Colo., to serve as Artist in Residence in collaboration with the Rare AIR Artist in Residence series. While there she hosted interdisciplinary workshops, produced artwork, engaged with the community, and opened a solo exhibition titled: PLAYNTINGS: Rescape.

Under the mentorship of Professor Alex Willemin, Assistant Professor of Film and Media Art, the JU Film department summer production, Matched, appeared as an official selection of the Fort Myers Beach International Film Festival last spring. Matched follows a man who steals a kidney from his Tinder date in order to save his own daughter.

Professor Willemin regularly produces summer and winter films with students outside of class. He works to provide students experience on a professional set where they have the opportunity to grow as filmmakers. Acting as director for these films, Willemin, along with his students, cannot submit Matched under student categories. Instead, his students’ work competes against professionals from across the globe, a rare opportunity for undergraduates.

Dr. Jorge Majfud, Associate Professor of Spanish, Latin American Literature & International Studies, published a novel last year. Tequila, published by Sudaquia in New York, follows seven college students on a road trip to California. The trip takes a wild turn after one student is murdered. The page-turner explores the stripping off of the masks people wear. It pits civilized individuals against their own selfish means of survival. Wanting to work with a simple, linear structure, Dr. Majfud realized there was nothing more linear than a road trip. The Tequila storyline connects Jacksonville to Los Angeles via I-10. The tragedy in New Orleans then transforms the characters and reveals the real personalities of each traveler.

Juggling family commitments, his responsibilities as a professor, and the demands on his time as an author, Majfud said, has been difficult. But he counts himself fortunate for the chance to do something he loves.