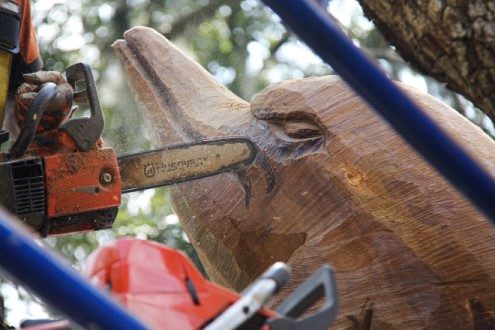 In 2017, Hurricane Irma ended the life of a more than 150-year-old oak tree just beyond the patio of River House. Two years later, Chad Gainey is using his chainsaws to resurrect the tree’s dead stump.

Gainey, a Husqvarna global ambassador and world-renowned artist, is turning the tree into a trio of Jacksonville University-branded dolphins. The sculpture should be finished just in time to cap off Thursday’s Future Fest activities at River House.

“Both Mark (Swope, JU Grounds Manager) and I possess a love for trees and preservation. After we both arrived at JU in the fall of 2018, it did not take long for both of us to see the potential opportunity of turning what most people see as an ugly dead tree into a piece of art,” says Brendan McCarthy, General Manager for Aramark at JU. “Given the location at the River House and our vision of dolphins being carved, we started our research on how to get this done. We both have had working relationships with Husqvarna in our pasts and know what their service capabilities are.”

Gainey, who started carving on Monday, says he’ll use all 12 of the chainsaws he carries to turn the approximately 20-foot tall and 204-inch round stump into the finished sculpture.

“It’s a pretty ambitious project for three days,” he says. “It’s tough to estimate how long a sculpture like this will take because you never know what you’ll find when you start carving. Things can kind of get out of control depending on the condition of the tree. Sometimes things like angles can change.”

Gainey started using his chainsaw in 2011 to carve tiki sculptures to sell with his family at a local farmers market. His first carved tikis from scrap logs because, he says, “Tikis are supposed to look rough cut and, usually, the uglier, the better.” He sold tikis for just a few weeks before customers requested he carve saltwater fish and birds. That’s how Chad, a former high school agriculture teacher, became a chainsaw artist.

​Chad, who holds a Bachelor’s Degree in Agriculture Education from the University of Florida, partnered with international power equipment manufacturer Husqvarna in early 2015 to become a full-time chainsaw artist. In 2018, Husqvarna named Chad as a member of North America’s inaugural H-Team, a group of global ambassadors known for their skill, professionalism, and knowledge of Husqvarna products.

​His carvings can currently be found across the United States as well as Canada and Europe. In October 2016, Chad was featured as a master carver on Food Network’s highly rated series, Halloween Wars.

​Chad resides in north Florida with his wife and three children.

The sculpture is just one of the activities scheduled for Future Fest at River House from 6-9 p.m. Thursday. The entire JU community is invited to the celebration of the kickoff to the 2019-20 academic year which also features:

How to Help Repair Hurricane Damage and Prepare for the Future:

Jacksonville University experienced more than $1 million in damage during the 2017 hurricane season, including losing more than 40 mature oak trees.

We routinely invest in the professional care and maintenance of our trees for the safety and beauty of our community and these efforts helped limit our damages. Additional investment is required to replenish the funds needed for the continued care and restoration of these massive trees.

The Hurricane Restoration and Preparedness Fund helps us prepare for and recover when disasters strike.

Go to https://www.ju.edu/strongasoak/ to donate or for more information.