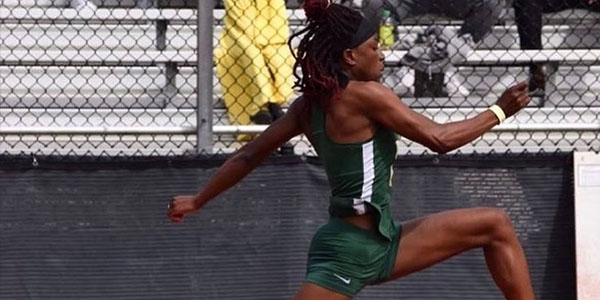 This summer Jacksonville University’s Track and Field team is enjoying a runner’s high as it proudly sends off two of its alumni to the Olympic Track and Field Trials, Adja Sackor and Michelle Howell. The trials are taking place June 18-27 in Eugene, Oregon, at the University of Oregon, and the top three runners from this meet will be off to compete in the 2021 Tokyo Olympics. According to Director of Track and Field, Ron Grigg, Jr., “The U.S. Olympic Trials is the third most competitive track meet on the planet after the Olympics and World Championships.  For Adja and Michelle to have qualified, it solidifies their ‘world class’ status.” Here’s some information about our athletes to bring you up to speed:

Sackor has spent her last four years at Jacksonville University competing on the Track and Field team and recently graduated this May with her bachelor’s degree. As she concludes her final year of eligibility in Track and Field, she will also be pursuing her Master’s in Science in Instructional Leadership, Training, and Development at Jacksonville University. This weekend, Sackor will be competing in the triple jump, where she is currently the thirteenth seed, her order in rank before the competition.

When asked what has inspired her over the years, Sakor shared her mantra: “Hard work beats talent when talent doesn’t work hard.” For Sackor, performance is about staying positive, focused, and technical. She even created a vision board during the tough COVID-19 training season to keep her dedicated to her sport. According to Grigg, “Adja is the very definition of ‘coachable.’ She trusts the process laid out by her coaches, and she works hard to learn the intricacies of the challenging triple jump event.  She has continued to put in good work, season after season, and it is blossoming into a spectacular career.”

Sackor needs to jump at least 13.6 meters to be part of the top twelve and continue to finals on Sunday and says she is, “looking forward to putting Jacksonville University on the map and accomplishing one of my biggest dreams. I’ve always wanted to represent the United States through track and field and now I have a chance to. I am so excited to be part of this experience!”

Howell graduated from Jacksonville University in 2018, having also spent four years running for the Track and Field team. Howell began running professionally for Under Armour after earning her degree and just recently transitioned to coaching for IMG Academy – making a tough shift from professional group training to personal training. Despite the shift, Howell says that it, “reignited, in some ways, my own love for the sport after coming off of injury and a bad indoor season.” Like many athletes, competing at the trials has been a goal for many years. However, after Howell sustained a labral hip injury in 2020, she was unsure she would be able to hit the mark, which for her event, the 800, was set at 2:02.50. Yet, Howell qualified this season with a 2:02.26 and says, “I’m excited to go compete to the best of my abilities and see what happens!”

When asked about Howell, Grigg affirmed that, “Michelle is intrinsically motivated and willing to devote time to the details of improvement.  It is difficult to be a post-collegiate track and field athlete, trying to find a way to make ends meet and train at the highest level.  Michelle has found a way to continue to strive for her goals.”

Both Sackor and Howell have strong relationships with their Jacksonville University track mates and coaches and believe that their experiences on the team led them into a successful career of professional running. As our Dolphin alumni tighten their laces and prepare for the trials in the upcoming days, the Jacksonville University Track and Field family is cheering them on. “We are all so proud of their accomplishments, and we want them to enjoy this experience as they have reached a pinnacle in our sport,” said Grigg.