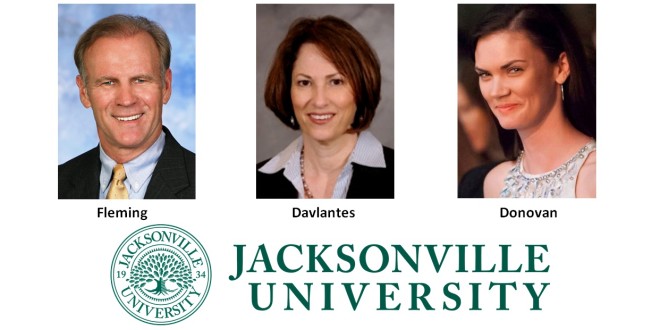 “These are outstanding individuals in our region with extraordinary talent, experience and dedication,” said JU President Tim Cost. “Mike brings broad and deep senior-level executive leadership experience in multiple positions, and Terri is well-recognized for her highly advanced skills in academic program startup and marketplace innovation. Diana is one of our most enthusiastic and accomplished graduates. They will all help JU as we continue to offer the finest student educational experience and contribute to the growth and quality of life in our region.”

Fleming, a retired Brigadier General and distinguished military veteran, was most recently Managing Director of Deutsche Bank. With a stellar four-decade career, he will be responsible for developing and enhancing JU’s relations with key government, community and military leaders and representing crucial priorities and policies of the University. His unique background and extensive strategic relationships will serve JU well as it continues to expand its reach into the community, Cost said.

Among his numerous accomplishments, he led and grew Deutsche Bank Jacksonville from 700 to more than 1,400 employees; served as the Assistant Adjutant General responsible for more than 10,000 Florida Army National Guard soldiers; helped coordinate the Florida Army National Guard’s development of a comprehensive mobilization plan immediately after 9/11; led a team that analyzed the North Atlantic Treaty Organization’s Partnership for Peace, resulting in a report published by Harvard University; and led an 800-soldier unit delivering logistics, supplies, maintenance and health support services to forces of up to 10,000 personnel.

Davlantes, former Vice President of Strategy and General Counsel for Florida Coastal School of Law, will lead the effort to develop the recently announced EPIC into a premier research, education, policy and engagement initiative that helps boost Florida’s economic development and equips JU graduates with high-demand cross-disciplinary skills. Davlantes will manage JU’s efforts across campus and the community to achieve the ongoing initiatives of EPIC.

Among her many achievements, she has overseen corporate development, strategic planning and execution, accreditation and management of faculty and staff at Coastal Law; launched the JD/Masters in Public Policy joint degree with Jacksonville University; helped begin the LL.M. degree and Certificate program in Transportation and Logistics Regulation at Coastal Law, the first of its kind in the United States; started the Center for Law Practice Technology; helped lead design and relocation of the law school from an 88,000-square-foot facility to a 225,000-square-foot, state-of-the-art campus; and played a key role in the American Bar Association (ABA) accrediting process for the law school. She is also immediate past Chair of the Jacksonville Aviation Authority Board and a board member since being appointed by Florida Gov. Rick Scott in 2011.

JU 2011 alumna Diana Donovan joins the University in the newly created position of Director, Office of the President. She was most recently Director of Scheduling for Jacksonville Mayor Alvin Brown’s administration. Previously she was a JU Admissions Event & Visitation Coordinator and a JU Ambassador. Diana won the JU “Dolphin Award” in 2011 for leadership, as well as the “Miss Dolphina” Award as a student. In her new role, Diana will provide support and leadership in interactions with alumni, donors, current and prospective students, parents and JU athletes.