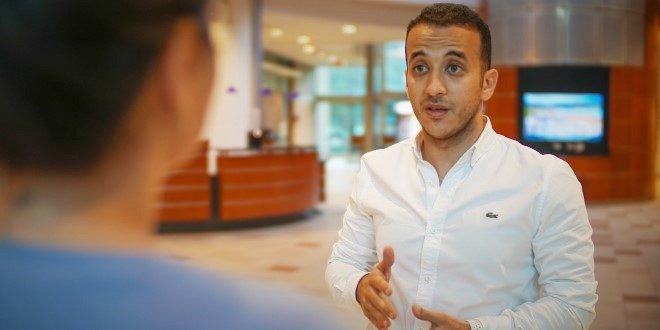 If you knew the key ingredients to a successful life and career would you share them?

To understand how, you have to look at his roots in the Middle East and his intentional journey to the United States and Jacksonville University.

“Life is very competitive in Egypt,” says Rashed, who was born in Egypt to his father and mother, Gharib and Mervat.

At age 2, Rashed’s father, a successful professor and cardiologist, moved his family to Jeddah, a city on the Western coast of Saudi Arabia along the Red Sea.

“You can make and save more money in Saudi Arabia,” Rashed says. “There is no tax, you can receive a lot of benefits if you work for big international organization, such as schooling allowance and full health coverage from your employer.”

While Rashed’s life was certainly better in Saudi Arabia, his opportunities were constrained in his adopted country.

“I was not allowed to go to undergraduate school as a foreigner.” Rashed says.

With his prospects limited, Rashed returned to Egypt to pursue his Bachelor of Science in Pharmacy at Alexandria University. Upon graduation, Rashed once again left his home country for Saudi Arabia. He began his career at Servier Pharmaceuticals, first as a medical representative and then product expert. In 2014 after two years at Servier, Rashed was awarded representative of the year based on his sales performance and marketing activity.

Yet Rashed felt his opportunity for growth had stagnated at Servier so he set his sights on his next milestone position with Johnson & Johnson. The move meant a lower salary but enhanced experience in Rashed’s preferred field of medical devices used for spinal surgeries. Rashed’s new position kicked off with 30 days of training in Germany to learn the spinal techniques specific to the medical devices that Rashed would be working with. In his new role, Rashed sold anything related to spinal surgery and supported and trained surgeons and operating room teams during operations.

Rashed excelled in his four years while at Johnson & Johnson. In 2017, he was awarded spine salesman of the year for the Middle East, Egypt and Pakistan region for achieving the highest level of new sales in the region.

Rashed’s pattern of high performance was calculated risk-taking on the way to a successful career and life for his family. Every year, Rashed worked tirelessly to outperform others in his division so he could save any extra commission he earned. For Rashed, his next big move would need to be to the United States. In the U.S., he could gain further experience and pursue his MBA from an accredited university.

“I wanted to improve my skills and have a better quality of life and education for myself and for my kids,” Rashed says. “There is more freedom in the U.S. It is more diverse and the environment here will help me to achieve my dream to be one of the most successful leaders in the healthcare industry for the future.”

While at Johnson & Johnson, Rashed enrolled in private English courses and studied for the Graduate Record Exam (GRE). In 2015, Rashed traveled to the U.S. with his wife, Ebtehal, and opened a bank account to build their credit. He named his first daughter Lara, now 5-years-old, and his second daughter Lina, now 2.5-years-old, in preparation for their eventual move to the U.S.

“I was planning for this move 7 years ago, that’s why I named my kids with these names to be easier to pronounce,” Rashed says.

In 2019, after seven years of careful planning and saving, Rashed moved to Jacksonville. Rashed says he took such a huge leap of faith not because of smarts, money, or planning. Instead, he cited courage as the characteristic that made all the difference. His move to Jacksonville meant he had to leave his family in Egypt for one year while he completed his MBA and found a job and a suitable home. He says he longed for his family what felt like every second of the day.

“It was so, so hard leaving them,” Rashed says. “I am a risk taker but I have only one weakness – my family.”

He says his parents did not understand why he would choose to leave behind a good-paying job, summer vacations, and a comfortable life. Rashed felt confident though that the move to the U.S. would allow him to gain vital experience in cutting-edge medical devices technology used in surgery.

Upon arriving in the U.S., Rashed filled his free time driving for Uber and Lyft. Though he had enough money saved to support himself and his family for two years, he filled his idle time to distract himself from the loneliness he felt being separated from his family and friends. By the summer of 2019, he decided to move his wife and children to the U.S. six months earlier than originally planned. He began a graduate assistantship with JU’s Davis College of Business. Every morning, Rashed submitted at least one job application for pharmaceutical or medical device positions. He was met with many rejection letters and much silence. No email replies or returned phone calls. He took to LinkedIn to broaden his network by posting more often, connecting with spine experts and following big companies in the medical and pharmaceutical industries.

After many months, one of the biggest multinational medical device companies finally invited him to interview for a position in Orlando. After finishing his interview in Orlando, Rashed drove north to pick up his family in Jacksonville and then on to Atlanta to attend the 2019 National Sales Network Conference. The conference requires applicants to pre-apply for an interview slot. Rashed was told that all interview slots were filled, but he showed up anyway. Rashed gave his resume to a Medtronics representative and told him of his journey to America and his aspirations to bring robotic surgery technology to the Middle East. The rep said he would pass along Rashed’s resume. As Rashed left the building, the Medtronic rep flagged him down and invited Rashed to interview the next day in with the VP of sales. Rashed seized the opportunity and once again shared his story of persistence, courage and calculated risk.

Within a few weeks and after jumping through countless hoops, Rashed received three offers from two of the biggest medical devices companies in the world. In October of 2019, Rashed accepted a position with Medtronics as a robotics and navigation clinical specialist.

“You have to invest in yourself. I am a long-term thinker, I am a risk taker, and I accept whatever the results,” Rashed says. “I only have a plan A, no plan B. I do not want an alternative plan because I believe that I will always achieve my first plan.”