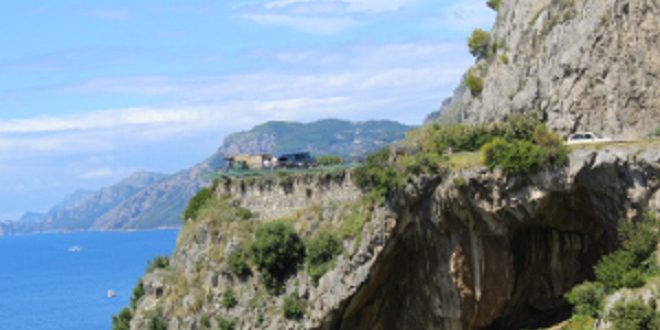 “March along, sing our song, with the Army of the free,
Count the brave, count the true, who have fought to victory,
We’re the Army and proud of our name…” ~ from U.S. Army Anthem “The Army Goes Rolling Along”

Senior communications major and student veteran Sgt. Stephen Eager said, “It was hard to leave Italy, but it was time.” A participant in the 2018 Maymester, Eager spent three weeks in Sorrento earning six credits towards his degree, along with nine other Jacksonville University (JU) students.

The faculty-led study abroad organized by Dr. Annmarie Kent-Willette, Director, Center for Teaching and Learning and a professor in JU’s Communications Department, along with
Professor Ginger Sheridan with JU’s College of Fine Arts, involved majors in Communications, Photography, and English. Students stayed at the beautiful Sant’ Anna Institute where they enjoyed not only the view, but also a matching tuition rate, priority housing, free Wi-Fi, and kitchen access. 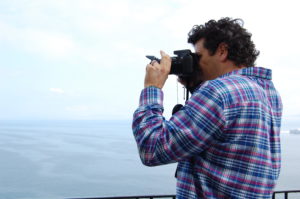 “That’s very affordable, I think, and the reason I was able to do it,” said Eager. “I was on the waterfront side and could see the entire marina. A five-star hotel feel, for sure.”

Participants were responsible for airfare, food, and other incidentals, in addition to all academic assignments associated with the program. “It was the perfect amount of time,” he said. “Not too short, not too long.”

Eager left behind his four daughters ages 12, 10, 9 and 7. On his blog literaltruths, a component required by the program, addresses what went into his decision to study abroad this summer. As he grappled with value to be gained versus time away from family and other responsibilities, Eager said, “Cultural diversity increases understanding, and if I can bring that value back to my children, that’s an important lesson for us all.”

A U.S. Army veteran medically retired in 2014, after 11 years of service that took him to Afghanistan, Iraq, Korea, and other duty stations. He suffers from PTSD and is candid speaking about the challenges he faces. As his supervising professor, Kent-Willette said, “Participating in this trip was a major accomplishment, and I encourage anyone to read his writings. Those posts give voice to insights he may not vocalize as readily.”

He says the real personal challenge was being alone—without his wife Cassandra, his daughters, and without Moose, his constant companion. The 78-lb. Golden Retriever service dog did not travel to Sorrento. “I could have brought him,” Eager said. “Italy is very open to it, but I still didn’t want to take the risk of going through customs on both ends. Worst case scenario, he might have been quarantined in a foreign country and that would not have been fun.” 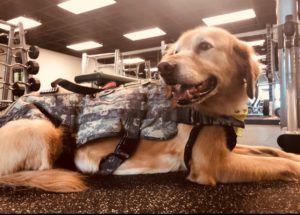 “This is such a military-friendly school. JU gives the benefit of the doubt to veterans, and took a chance on me.”

This was the first time Eager has travelled overseas without being governed by the Geneva Convention or the military. He said, “That’s partly why I chose to do this. I’ve been all over the world, but never had this experience. This one was for me, not for a mission, and I learned a lot.”

The Wounded Warrior Project (WWP) first brought Stephen to Jacksonville, Florida, where he enrolled in one of only two education centers in the nation specifically designed for wounded warriors. The 12-month program provides veterans with a head start on educational goals while also supporting their personal health, wellbeing, and career development. After completing the WWP program, which coincided with his attendance at Florida State College at Jacksonville, Eager transferred to JU.

“I’m not from Florida, so I didn’t even know JU existed. That’s when I met General Fleming.”

Brigadier General (ret.) Michael P. Fleming, recently transitioned from his position as Senior Vice President with University Relations and Development into a consultant role at JU. Over his four-decade career, he held such positions as site leader of Deutsche Bank Jacksonville, Assistant Adjutant General of the Florida Army National Guard, Chief Legislative Liaison for the National Guard Bureau at the Pentagon, and National Security Fellow at Harvard University. He is one of many stellar JU administrators, staff, and faculty with military backgrounds.

Fleming facilitated a team-building golf excursion for several JU military and veteran students, and Eager deeply appreciated being included. “He’s a funny guy and always very supportive of the military. Anytime I’ve ever needed something, he was there, smoothed things out and backed me up.”

Eager also counts Associate Professor of Communications Keith Saliba and Dr. Scott Kimbrough, Professor of Philosophy, among other faculty members that have encouraged and supported him. Though some veterans opt to wait two or more years after military retirement to make decisions concerning education or future careers, Eager says the immediacy of starting an educational program, like WWP and his current degree program, helped ensure a successful transition into civilian life. 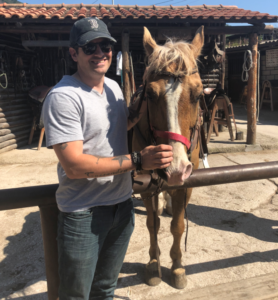 “Understand that this Sorrento trip is a 16-week course condensed into three weeks, and for me, that was one of the biggest challenges. Most of the students were Honors students, and the closest person to me in age was 23.” But despite the hard work expected of participants, Eager said he enjoyed many shining moments, including day trips to Mt. Vesuvius and Pompeii.

One of his classmates with a personal interest in equestrian activities did some advance research into Mt. Vesuvius. “We took the ferry over to Naples one Saturday, the tour guides picked us up, and we rode up the mountain as a group, which was breathtaking,” he said, and the cost was a mere EUR 60. Vesuvius, at an elevation that exceeds 4,200 feet, last erupted in March of 1944, and students viewed volcanic black rock and solidified lava flow paths along the way. The famed, ancient city of Pompeii was also a highlight for Eager. “Most of the city is underwater now, and what amazed me was how much of what remains is original.”

The first night in Sorrento, the group dined at a pizzeria Dr. Kent-Willette calls the best in the world. Eager said, “In Italy, you don’t order a slice of pizza, and you don’t share. You get an entire pizza.” For students watching the carbs, like he typically does, Eager says the amount of walking the trip requires puts carb counting out of mind. He also lists gnocchi and local wines among his favorite foodie moments.

Limoncello, an after dinner drink made of a lemon-based liqueur and produced in the region surrounding the Gulf of Naples on the Sorrentine Peninsula, home of the Institute, and another part of Italian culture that Eager quickly grew to love. “The Italians are really concerned with digestion, and limoncello is traditionally served following a meal, at no extra cost. I hear it’s easy to make, but I think it would be difficult for me.”

He laughs when he describes returning home to the States and ordering a Panini, hoping for what he experienced in Southern Italy, but the result was “definitely not up to par.”

After graduation, Eager hopes to pursue a law degree or perhaps a Master of Public Policy at the Jacksonville University Public Policy Institute. He says, “I’m still trying to figure out what’s best based on the fact that I’m getting older and have four kids who also need my time and attention.” Regardless of what the next chapter of life brings, Eager says that JU is the perfect fit.