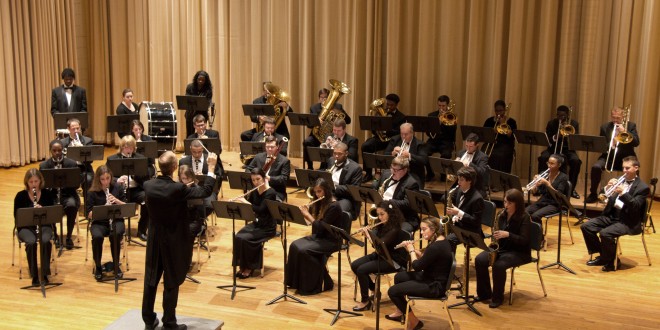 The College of Fine Arts Performing Arts Series presents the JU Wind Ensemble with select students from seven local high schools in concert at 7:30 p.m. Saturday, Feb. 21, in Terry Concert Hall. The concert is free to the public.

The program features the music of internationally known American composer Robert W. Smith, who will guest conduct a performance of his own music. The group will perform four of Smith’s works: Currents, Ireland: Of Legend and Lore, Africa: Ceremony, Song and Ritual and a Smith medley arrangement of the music of film composer John Williams titled Soaring with John Williams.

Smith is one of the most popular and prolific composers of concert band and orchestral literature in America today. He has more than 700 publications in print. His music has received extensive airplay on major network television as well as inclusion in multiple motion pictures. From professional ensembles such as the U.S. Navy Band and the Atlanta Symphony to school bands and orchestras throughout the world, his music speaks to audiences in any concert setting.

As a conductor, clinician and keynote speaker, Smith has performed throughout North America, Asia, South America, Europe and Australia. His music has been recorded by various ensembles and is available on CD and download through Walking Frog Records, iTunes, Amazon, and other recorded music outlets. In addition, he is co-creator of the Expressions Music Curriculum. This comprehensive Pre-K through 12 music program includes Band Expressions, an innovative new approach to teaching music through the band.

Smith is the Vice President of Product Development and is an exclusive composer for the C. L. Barnhouse Co. and Walking Frog Records. In addition, he is currently teaching in the Music Industry program at Troy University in Troy, Ala. His teaching responsibilities are focused on music composition, production, publishing and business.

The concert will also include Smith conducting the First Coast Wind Ensemble in a new work written by the composer titled “Postcards from the First Coast.” The ensemble will also perform his popular Symphony No. 3 “Don Quixote” and his Willson Suite, a concerto for euphonium and winds featuring soloist Benjamin DeAngelis.