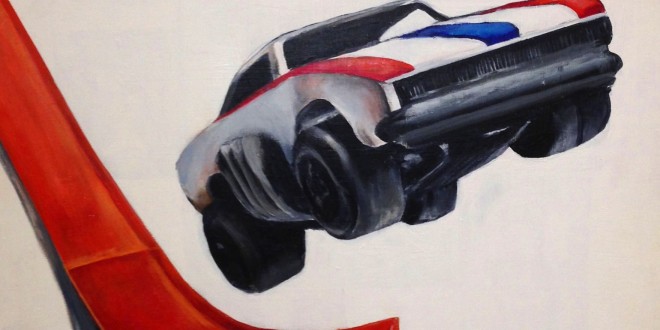 Vivid artwork highlighting military life, survivalism, nostalgic toys and even a 7-foot-tall 3D printer will be on display beginning July 29 at Jacksonville University as six contemporary artists pursuing master’s degrees in visual arts unveil their recent works at the Alexander Brest Gallery. An opening reception for the free “MFA: in the works” exhibit will be from 5-7 p.m. at the gallery. (See a Facebook photo gallery of the exhibit here.)

The opening exhibit will highlight the works of JU Master of Fine Arts in Visual Arts students, including U.S. Navy veteran Tawan Harrell Chester, who reveals a journey through the sometimes invisible, undiscussed world of risks and empty rewards when retiring as a military service person. She uses handmade paper, re-purposed military uniforms or surplus items on which to build her lithography prints, acrylic, and mixed media composition.

The exhibit also includes works by Tom Fort, whose main artistic focus is hand engraving of small sculptures related to post-apocalyptic survival and belief systems; Sarah Good, who transforms two-dimensional surfaces, making them appear as three-dimensional forms in her series, Batteries Not Included, which focus on kinetic toys from the 1970s and 1980s; Sarah Hanno, an Egyptian graphic designer, showing a dual-language campaign targeted in Egypt named #Fael_Khier, which in Arabic means benefactor; Russell Maycumber, displaying hybrid works of science fiction and folk art exploring the darker side of our psyche with overgrown plywood larva and flies the size of your head; and Brandon Lettow, who will showcase his three-dimensional kinetic sculpture that explores the performative aspects of art by way of machine — including a 3D printer standing more than 7 feet tall.

The artists will be available to discuss their work.  The gallery exhibition opens Wednesday, July 29, and will remain up until Aug. 26. Gallery hours are 9 a.m. to 5 p.m. Monday through Friday.

The MFA in Visual Arts in the College of Fine Arts at JU is a two-year, low-residency program emphasizing the creative process of generating new works that are grounded in both classical and contemporary art genres. Each year the program starts with a six-week Summer Intensive on the campus of Jacksonville University. This is followed​ by two non-resident semesters using a combination of distance study with JU faculty and mentors who work one-on-one with each student to expand their project-based work. The degree is geared toward professional artists in transition.