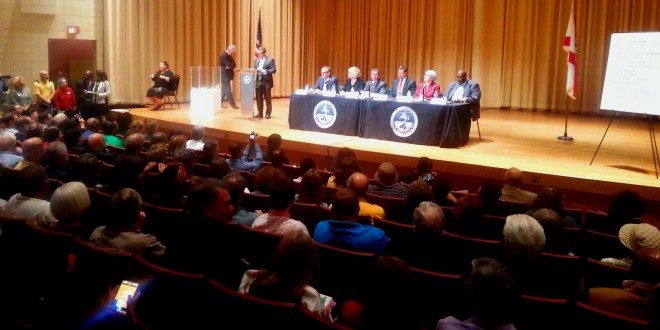 With impassioned views on both sides over whether the city’s anti-discrimination laws should be expanded to cover lesbian, gay, bisexual and transgender people, the Jacksonville University Public Policy Institute did its job well Tuesday, Dec. 15, hosting respectful discussion on – and disagreement over – an issue of great importance to the community, PPI Director Rick Mullaney said.

The 400-seat Terry Concert Hall was the site of an overflow crowd at the last of Mayor Lenny Curry’s three “community conversations” on the topic. The first meeting on family issues was held at Florida State College at Jacksonville’s downtown campus, the second on religious perspectives at Edward Waters College and the third on business implications at JU.

“One of the important roles of our university, and clearly one of the objectives of the Public Policy Institute, is to provide a neutral gathering place for public policy education, discussion and debate,” Mullaney said. “The ability to hear different points of view and to be respectful of those points is vitally important. We have a track record at JU of hosting productive discussions on a variety of issues, including health care, education, energy, criminal justice and the economy.”

The town meetings have put the national spotlight on Jacksonville, with reporters from media including the New York Times covering the divisive issue and how the city is addressing it. In 2012, the Jacksonville City Council rejected a bill 10-9 expanding the city’s human rights ordinance to protect gays and lesbians from discrimination.

Mullaney applauded the mayor for structuring the conversations in such a way that all sides were heard from, including comments by articulate panelists and questions raised from members of the public. Michael Boylan, president and CEO of public station WJCT, did a “very thoughtful and measured job of moderating the discussions,” ensuring the constructive dialogue everyone had hoped for.

“Going forward, the Institute is committed to providing a central neutral gathering place for the entire community,” Mullaney said. “The PPI tries to play a constructive role, in its academics, by providing expertise, and by promoting discussion, which plays such an important role in our community and in our democracy.”