Virtuoso drummer Chester Thompson, who has played for Weather Report, Genesis, Phil Collins, Frank Zappa and many other top musicians, performs an evening of jazz with his Chester Thompson Trio at 7:30 p.m. Thursday, Nov. 3, in the newly renovated Terry Concert Hall on the Jacksonville University campus.

The trio will conduct a free clinic open to the community from 3 to 4 p.m. in Terry Concert Hall before performing in concert. 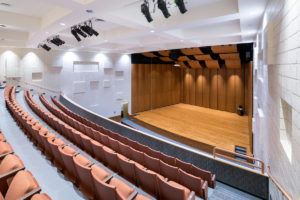 Thompson is known for his precision, presenting a range of time feels, grooves and colors. He and his bandmates, bassist Michael Rinne, son of JU College of Fine Arts Dean Henry Rinne, and pianist Joe Davidian, deliver outstanding solos while maintaining the same level of creativity and intensity in support of their colleagues.

Thompson’s performance and recording experience has influenced music and musicians for more than three decades. He has recorded and performed with some of the biggest names in jazz and rock, including Weather Report, Joe Sample, Freddie Hubbard, Ahmad Jamal, Phil Collins, Genesis and Frank Zappa. He teaches drumset at Belmont University in Nashville and regularly tours internationally, giving performances and drum clinics.

Davidian also teaches at Belmont and at the Nashville Jazz Workshop, and plays regular jazz gigs around town. He also has recorded three trio albums under his own name. Michael Rinne is a first-call Nashville bassist for sessions, and is a member of the premiere studio orchestra the Nashville String Machine.

“I am fortunate to play with them,” Thompson says on his Facebook page. “Joe Davidian and Mike Rinne are very young and have a lot of energy, but they play with wisdom of musicians twice their age. The musical communication we have is very special, so things happen when we play that we do not have to talk about.”

Tickets for the concert are $25 for the public, and free for JU staff, faculty and students, and other area students. They are available at jutickets.com. For more information on the event, call (904) 256-7345.