Home » All Sections » Charter Day 2016: ‘An invitation for JU to serve … and look what happened’ 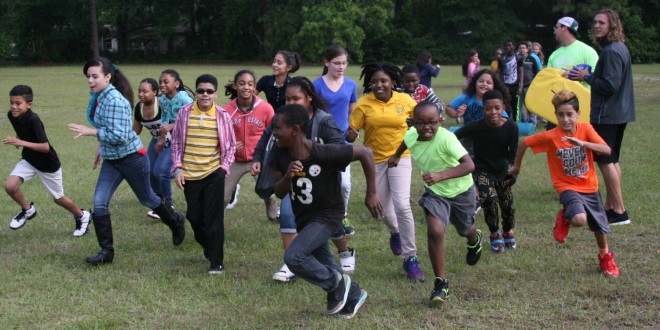 Arlington Heights Elementary School students race to their next drill at the JU football clinic with players and coaches held on Charter Day.

Charter Day 2016: ‘An invitation for JU to serve … and look what happened’

Football Head Coach Ian Shields, crouching down over and over again with a 10-year-old student at Arlington Heights Elementary School in an informal clinic, boosting his confidence to line up with just the right stance, while helping him in a broader sense to see “what right can look like” — all watched by a thrilled Phys. Ed. teacher Sharon Skipton.

Sophomore Finance major Fred Blaz, 25, an Afghanistan War veteran, moving furniture at Five Star Veterans Center, enlivened and perhaps even a bit reassured as non-veteran students all around him helped out, improving the rooms and hallways of displaced veterans.

Brigadier Gen. (Ret) Michael Fleming, Chief Government, Military and Community Relations Officer, still on the mend and just off crutches after major knee surgery, traveling to numerous volunteer sites throughout the morning, including at Five Star, where he explained JU’s indebtedness to Arlington to District Councilwoman Joyce Morgan and appreciative Five Star managers.

President Tim Cost, seemingly in all places at all times across campus, hopping on and off his golf cart, thanking volunteers at a celebratory noon luncheon, welcoming alumni to a Western-themed Carnival and BBQ, and taking time to step aside with the parents of a newly accepted recruit to Head Coach David Dobson’s Varsity Shooting Team, personally assuring them: “He’ll be in good hands in our strong family here.”

The waves of kindness across Arlington on Charter Day of Service culminated a landmark week of activities Friday, April 15, with more than 1,000 students, faculty, staff and alumni taking part in dozens of volunteer projects to give back to the community that Jacksonville University calls home. (See a photo gallery below.)

And while such waves of generosity may come and go quickly, the ripple effect is anything but fleeting — on the community or on JU and its students.

Each action leaves behind another small chapter in the University’s unfolding story. The symbolic gestures that attract a day’s worth of attention can sometimes serve more enduring purposes than meet the eye.

“One of the most robust outcomes of a day like today is the connections students make with each other and the community … it may be the first time they are making a sacrifice like this with their classmates,” said Cost. “They become more fully rounded, and how they do here at JU is going to have a lot to with how they connect to their community. That is one of the biggest intended consequences of today. I am thrilled about how this has been embraced. It was an invitation for JU to serve — not a mandate — and look what happened.” 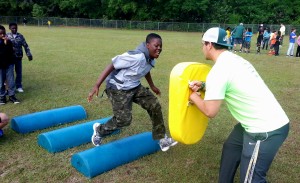 Landscaping, decorating, painting, distributing food, cleaning, mentoring and coaching were just some of the acts of service to commemorate the University’s 82nd birthday and continue the outreach into Arlington that was accelerated when Cost took office in 2013.

Here’s a brief look by the numbers at Charter Day 2016:

In front of campus in the Gooding Building parking lot, members of the community in need moved among mobile units from three providers: Feeding Northeast Florida, St. Vincent’s Healthcare and the Jacksonville Humane Society.

“I’m here to help my daughter, who has a Shih Tzu,” said Natasha Park, an Arlington resident. “She has some challenges and can use the pet food. It’s so convenient and easy, the way everything has been set up here.”

JU’s Fleming said the record participation shows the University has woven itself into the fabric of the community.

“It’s very exciting, for example, to see our international students working with our newly accepted students to help our neighbors around us.”

This year, JU decided one day wasn’t enough to celebrate its anniversary, so it expanded festivities into a full Charter Week 2016. In addition to volunteer projects as part of the week, students, faculty and staff enjoyed Wild West-themed fun, including movie night, square dancing, mason jar decorating and more. Other events over the week included a food drive and distribution, special Eli Young Band concert, a Brooks Rehabilitation College of Healthcare Sciences Distinguished Lecture by Exercise Is Medicine global founder Dr. Bob Sallis, a Global Toast and a TedX Salon on the topic of aging.

“As I planted trees this morning and saw all these students around me as we helped beautify our Arlington parks, I realized so clearly that we aren’t just teaching our students in class, but teaching them about their responsibilities in the community,” she said.

“I’m originally from Jacksonville, and I wanted to come home to go to school, and JU was extremely welcoming. Today is great to see, especially the other students here helping; it shows that they really care about the veterans in the community.”

Down the hall from Blaz, Councilwoman Morgan watched as a group of JU students moved a mattress into a veteran’s new room.

“For JU to be doing this in the Arlington area is a major, major event, because one of the things we’ve talked about is how we can connect all the resources that we have in our community to the people who need them, and that is what is happening right now,” she said. “Tim Cost has his students out on the move in Arlington. This has never been done before in our area on this scale. I’m all in. JU is making a difference, and this is just the tip of the iceberg.”

Skipton, the Phys. Ed. teacher at Arlington Heights Elementary, watched as a student hit a blocking pad twice his size, held up by a Dolphins football player who encouraged him on. Then she smiled as the exuberant group of kids waiting their turn in line broke ranks and charged back across the field as Coach Shields blew his whistle to signal time to rotate to the next drill.

“I can’t express how this means the world to all these kids. They don’t get exposed to this type of thing, being with these JU students here and working with them as role models,” she said. “They can see how they can continue their education, play sports … because they can identify with the players and see what they’ve become.

“It’s so great for JU and its students to be involved this way.”

JU had faced a perception that it’s not the part of Arlington it could be, said photo project participant Galdona, as she clicked away in the Gooding parking lot while newly accepted students bustled about, handing out food to area residents.

“This is really good for us to help Arlington in its revival,” she said. “We are like a community within a community here at JU. And this opens up the gates and gives us a chance to give back.”