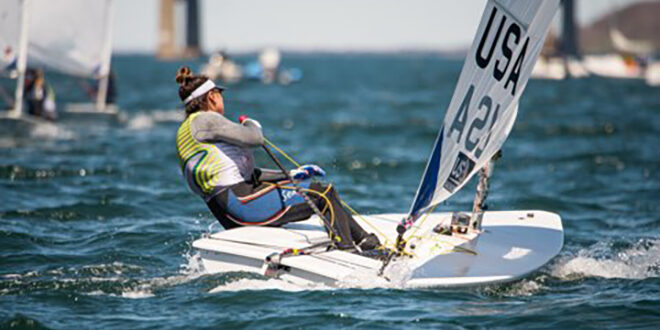 The day dawned over Narragansett Bay in Newport, R.I., with bright skies and a brisk northerly wind. On the bank, the boats sat uncharacteristically still. Built for speed, the Laser Radials were meant to slice through currents, but like most of the college sailing world, their competitions had been on a pandemic-imposed pause. Today that would change.

By 9:30 a.m., the athletes were already assembling. They represented schools from across the nation – Georgetown, Tulane, Tufts … A total of 55 competitors would participate over the next two days in the Women’s and Men’s Open Singlehanded National Championships. Charlotte Rose and her teammate Maartje Van Dam from Jacksonville University were among them.

Rose had been there before. For the last two years, she had represented JU in the women’s singlehanded sailing discipline, in which boats are individually manned. Both times, she had come up short, finishing just a point behind winner Christina Sakellaris from Stanford University as a freshman and one place behind Sakellaris as a sophomore. In addition to being fellow competitors, Sakellaris and Rose are also friends and training partners in the U.S. Sailing Olympic Development Program in which they are both enrolled. Sakellaris was just one of several familiar faces in the crowd that morning, in what is believed to have been the largest single-discipline college regatta ever.

In the women’s division, there would be 14 half-hour races spread over two days. Rose was ready.

“I was pretty relaxed,” she said. “I usually don’t get too pumped, but I was in my zone and just clear-minded. Also, I was excited to sail my Laser again because I hadn’t sailed it since February.”

The course would take sailors from a buoy-designated starting “line,” around an upwind mark, then to one of two downwind “gates,” and ultimately, to the finish at the same line where the race began. As is customary, scoring would be based on placement – two points for second place, three points for third, etc. – with the goal being to receive as few points as possible.

“I try not to focus on points throughout the whole regatta, since 14 is a lot of races,” Rose said. “I was just focusing on me and doing my best and getting the best score I could.”

The course was challenging. Conditions shifted throughout the day forcing Rose to change tactics as the regatta progressed. By the end of day one, she was in first place with a three-point lead over Sakellaris and six races remaining.

On day two, a 15- to 20-knot Newport southwest sea breeze greeted the women’s fleet. Rose knew the points were close. She lost the first three races to Sakellaris, but she had been sailing the Laser since the age of 12. She had competed in international youth events and won the Youth Worlds in 2017 and 2018. She could do this. Her plan was simply to go fast, and that’s exactly what she did, besting Sakellaris in the next two races.

One race remained. All Rose had to do was finish behind Sakellaris for the win.

“Coming up to the finish line, I was like, ‘Oh my gosh, I’m going to do this,’” she recalled. “I told myself, ‘Come on, Charlie, you’ve got this.’ I was going to get it done this time. I crossed the finish line, and I didn’t even mean to, but I just yelled.”

Rose had just won her first Women’s Open Singlehanded National Championship, and in so doing had handed Jacksonville University its first national sailing championship win in any discipline.

Waiting for her on shore was JU head sailing coach Jon Faudree and teammate Maartje Van Dam whose boat had broken down earlier, taking her out of the regatta. Both were ecstatic.

“I couldn’t be more proud of her,” Faudree said. “I know this is something she’s been striving for, and to come close these last few years and finally reach this level — it’s huge. And it means a lot to the team as well because they’ve helped push her to this point.”

Under Faudree’s direction, the JU sailing team has steadily improved its rankings. There are approximately 200 college sailing teams in the country, and by Faudree’s estimation, JU would have been close to last when he started the program eight years ago. That makes Rose’s win all the more meaningful.

“It signifies that we’ve risen to the highest level in the sport,” he added.

Rose agreed. “It’s incredible how much our team has grown and how much we’re getting out there,” she said. “I’m just really thankful for the opportunities that I get here at JU and the opportunities I get because of Jon and the sailing team. There’s so many people who support me.”

That support was evident as Rose checked her phone and found the team group chat filling with congratulations. Coaches from other schools congratulated her as well, and Jacksonville University President Tim Cost texted his personal congratulations to Faudree directly.

Winning JU’s first national sailing championship is a moment Rose will remember fondly one day, perhaps after achieving her goal of competing in the 2024 and 2028 Olympics. Her future plans also include completing her major in kinesiology and minor in psychology, becoming a physical therapist and, more immediately, helping the JU sailing team realize its dream of a modernized facility on campus that they can call their own.

But first, before looking to the future, before celebrating with her team, before even leaving the boat docking area of the 2021 Women’s Singlehanded National Championship itself, Rose shared her win with her closest competitor. “Christina came up to me, and we hugged, and she said, ‘There’s no one I’d rather lose to,’ and I knew what she meant because I felt the same way.”

There would be no award ceremony that day, no trophies presented or plaques engraved, but Rose didn’t mind. College sailing had cautiously resumed, and she had returned to her Laser. With the wind of Narragansett Bay in the sail and the spray of the water on the hull, she had competed against a fellow student-athlete who had brought out the best in her, in a regatta she had finally won, and after years of trying, she was bringing home a national sailing championship to Jacksonville University, which had been waiting patiently for its very first one, for a very long time.

By
Jacqueline Palsha
Director of Communications