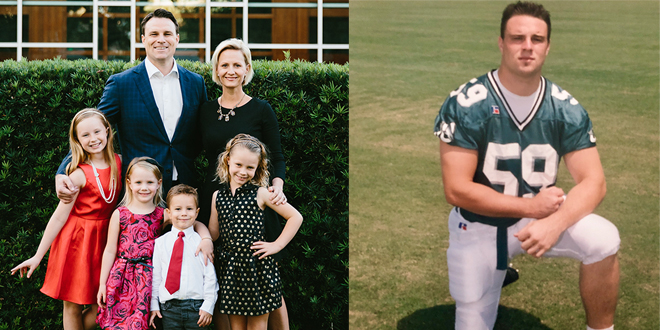 Catching Up with JU Alum & Former SOH Will Weatherford ’02

Will Weatherford, 2002 Davis College of Business graduate and 2015 Jacksonville University Distinguished Alumni, is a JU stand-out and the namesake of Weatherford Hall at the Village Apartments on campus–a fitting tribute to someone who daily works toward building stronger communities and inspiring others to lend a helping hand… and at age 38, he has gained more momentum now than ever. 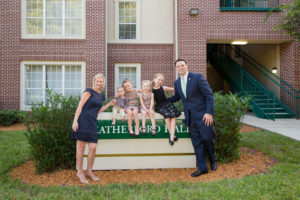 Long before Weatherford became the youngest Speaker of the House in any state in the U.S., at the age of 32, he excelled at football, and JU recruited him to play defensive end in 1998. By his senior year, Weatherford was team captain, vice president of student government, and roomed with teammate Jason Bense, son of Allan Bense, businessman and Florida Speaker of the House from 2004 to 2006.

Weatherford’s football days, his JU experience, and an endearing connection to the Bense family—which became more than a college friendship when Weatherford married Jason’s sister Courtney—worked together to impact his perspectives regarding policymaking, public service, and social responsibility.

“I wasn’t a big Division One recruit in high school, but I was a good player. I loved the game, loved the discipline it brought to life, and I loved being on a team.” Without a car or any financial means, he entered JU with no qualms about others knowing that he attended on an academic scholarship. “My parents took a pretty big leap of faith sending me to a private institution. Coming from a household with nine children, the idea of going to college and paying for it with limited resources was a big mountain to climb.”

Will’s humble beginnings as one of many siblings, all homeschooled, and the family living from paycheck to paycheck—inspired in him a pronounced compassion and provided a strong foundation on which to stand. Tough issues, like education and poverty, meant something more to Weatherford than they likely did to many whom he served alongside in the Florida House between 2006 and 2014. Today, he says, “It was on my heart during my time as Speaker to talk about issues that really mattered , even if you didn’t have all the solutions.One of those issues was looking for solutions to generational poverty.”

The U.S. Census Bureau reports that, in 2016, nearly 15 percent of adults and more than 20 percent of children in Florida lived in poverty. 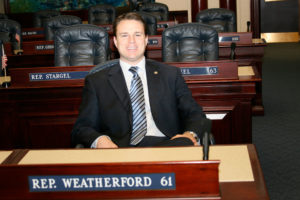 In his remarks to the 2014 Legislative Session, as the 84th Florida Speaker of the House, Weatherford challenged his peers to make “a concentrated effort on fostering upward mobility and disrupting generational poverty.” Will’s commitment to improving quality of life for his fellow Floridians has not dulled since leaving office.

Last month, Weatherford hosted the Florida Business Leaders’ Summit on Prosperity and Economic Opportunity, co-sponsored by the Florida Chamber of Commerce, in his role as Political Council Co-Chair. Those opening day remarks as an untried Speaker closely followed the sentiment he expressed at the summit. He said, “When people hear about 4 percent unemployment rates, or the stock market performing well, or real estate doing well, they forget there is a large section of the population that doesn’t have a large portfolio. In fact, they may not have a portfolio at all, or a job, Or even an education.”

“One in five of our fellow Floridians are living under the poverty level. One in five. That is unacceptable to me and it should be unacceptable to everyone in this room regardless of what party you come from,” he said during his tenure as Speaker.

So, what do those statistics mean in terms of dollars?

The U.S. Federal Poverty Guidelines state that a family of four making less than $25,000 annually is considered below the poverty threshold. Weatherford has spent most of his adult life advocating for marginalized populations, demonstrating the same grit and resolve in policy and business as he did on the football field.

At the summit in Orlando in early May, Weatherford cited education as a pathway out of poverty, and he spoke of choice. “It all starts with choice. It’s about empowering kids and parents to see there are multiple pathways to success.” His remarks included a comment on our current juvenile justice system and how one poor choice or minor offense can produce long-lasting effects that cripple a young person’s future. He stated, “The idea of this prosperity summit is not to think of creative ways for people who have achieved prosperity to receive more. It’s about finding ways to lift people out of poverty.”

Similar thoughts expressed by Weatherford on March 4, 2014 to a full Chamber received much applause from fellow legislators that opening day:

“While our unemployment rate is dropping… there are still too many Floridians looking for work. For example, if you’re a young person between the ages of 18 and 24, your unemployment rate is 15 percent. We live in a society where our next generation, our young generation, cannot pay their student loans. They’re not saving for retirement. They’re not buying homes—they’re moving back home. If dependency is the deep pit of quicksand, then education and the free enterprise system are the hands that pull us out.”

His unique approach to help solve difficult issues is something Weatherford began developing during his time at JU. He stepped up to one such challenge on a Tuesday morning in 2001.

He was still at home with roommates because his classes that day didn’t convene until mid-morning. “I remember hearing one of my roommates say that something happened at the World Trade Center. We were glued to the TV when I saw the second plane hit. No one went to class that day,” he says. Instead of having football practice later that afternoon, a team meeting was called. A decision had to be made about whether or not to forge ahead with a regularly scheduled game that Saturday. The opposing team was waiting to board buses and head toward Jacksonville.

“I remember that everything in life felt small. Figuring out a way to play a football game on the heels of a tragedy like that was really tough. Everything else going on in the world suddenly felt insignificant.” That was September, and the season had just started. “I also remember grappling with the uncertainty, and trying to lead my team when football wasn’t at the forefront of anyone’s mind.”

He doesn’t remember exactly what was said to rally teammates, coaches, or friends during his time as captain, but he recalls that many emotional conversations took place. “I did tell people that we weren’t going to let terrorists who live halfway around the world change our way of life. As tragic as 9-11 was, we weren’t going to be robbed of our season, our sport, our passion, or our American heritage.”

Since those difficult days, Weatherford embarked on a newsworthy career and has been a guest speaker on campus many times, including with the Jacksonville University Public Policy Institute. He was also instrumental to the University securing more than $10 million in public investment that helped launch its EPIC (Entrepreneurial, Policy, Innovation, and Commerce) initiative in 2014. Designed to attract and retain qualified students in high-demand STEM fields, it is a program that continues today with success. Projects range from educational video series to oyster reef assessment to law enforcement recruitment. Each project falls under the broad and collaborative umbrella of the Florida EPIC Program at JU.

“I’ll never forget the first time I met President Tim Cost. I was an incoming Speaker of the House and he was the newly-minted President of the University. I was extremely impressed with his energy, creativity, and his ability to think big on behalf of the University. This was a man with a vision.” 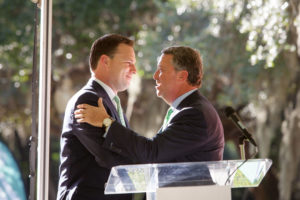 Weatherford was determined to use his brief tenure as Speaker to facilitate something of significance for his alma mater and fondly recounts EPIC’s origins. He got a call from President Cost on a Saturday morning. “He said to me, ‘You asked me to do some thinking, and I have… I’ve got this idea, but  it’s not going to be cheap.'” When Weatherford asked what type of funding most interested the University—recurring or non-recurring—the President’s reply was direct: “Can we get both?”

Today, 15 of JU’s EPIC participants are student athletes, some attending on scholarship. Thanks to the tireless efforts of Weatherford and University leadership and faculty, these students now receive an added benefit that Weatherford never imagined during his time living on campus.

Many other engaging projects were funded and supported around the state during Weatherford’s time in office, but the EPIC program at Jacksonville University, he says, was the most well-conceived and bold, which he credits to the University’s visionary leadership.

What’s the next step for Weatherford?

He views life in chapters, he says, and is now managing partner of a private investment company, Weatherford Capital, founded in 2014 by Weatherford and his brothers Sam and Drew.”I still care about public policy and I’m still engaged politically. But my goal right now is to build a business and to be a good dad and husband,” he says. Will and Courtney have four children—ages ten, seven, five, and three.

“When I left office, I was 34 years old, and I felt really blessed to serve my state, to serve as Speaker, but didn’t want to wake up 15 years later and realize I had no tangible relationship with my children because I was gone most of their childhood. You can’t have an impact on a child’s character if you’re not there. I felt called to be close to home, to be a good father and husband, to build a business, and have success in a completely new arena.” 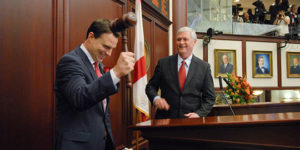 Weatherford says that he believes in fiscal responsibility, limited government, and less regulation, but he is equally passionate about social responsibility. “Business, government, and society have a role to play to help bring opportunity and justice to all members of our society, and not just some.” For now, he will continue serving on multiple boards and in a variety of leadership positions. One of those boards is the Florida Council of 100, on which he and President Cost both serve. He will also continue supporting Metropolitan Ministries in Tampa, Operation New Hope, Ready for Work, criminal justice reform, education reform, and combatting generational poverty.

“At Weatherford Capital,” he says, “we believe the reason we’re called here isn’t simply to run a private equity firm that makes money for investors. We believe that what we do will ultimately help those who need it the most. I choose to spend time with people and organizations who are making the greatest difference for those who need equal opportunity.”

As a Tampa Bay journalist once described Speaker Weatherford, he’s “better looking, has more friends, and has gone further faster than anyone in recent Florida politics,” but to the Jacksonville University community, he is much more. He is one of many dedicated alumni who exercise JU spirit and commitment in the real world. His legacy on campus goes beyond a name on a building or in a magazine, and he is one more extension of the University’s smart, creative, fearless student culture. It is a culture of future and present leaders who are not afraid to extend a hand of service or to face multi-layered issues challenging society today.

“Regardless of what a student is looking to do—venture capital, public service, health care—We should never put artificial constraints on ourselves and our goals. If someone had told me that I couldn’t serve in the House at age 26, I probably wouldn’t have tried.”

He says, if you feel you have something of value to offer, including a fresh perspective and a willingness to learn what you don’t know, don’t be afraid to step out. “People always seem to underestimate their own capabilities. That doesn’t mean you won’t have to work really hard to get there. You will. But it’s okay to have bold dreams and ideas, and then to pursue them.”