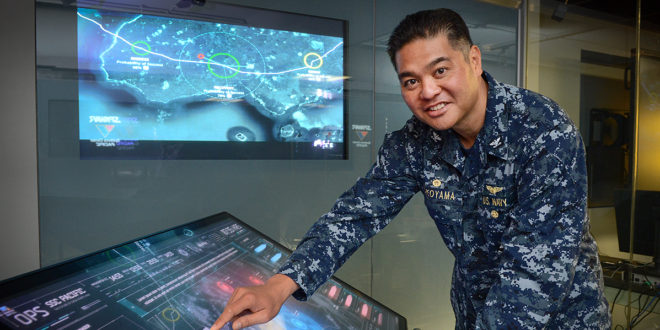 Capt. Mel Yokoyama ‘93 exercises his natural affinity for high-tech solutions while examining the latest touchscreen designs being incorporated into SSC Pacific's Future Vision demonstrations inside its Command Center of the Future. (Photo by Alan Antczak)

A landmark research facility in San Diego for more than 75 years, SSC Pacific is comprised of more than 4,700 scientists, researchers and engineers, and is a member of an exclusive team of research labs that make up the Department of Defense’s biggest brain trust.

A native of the Big Island of Hawaii, Yokoyama earned a Bachelor of Science in Business Administration from JU’s Davis College of Business, and was on the Dean’s list three times and President’s List once. He holds a Master of Science degree in systems engineering (information warfare and electrical systems engineering subspecialties) from the Naval Postgraduate School, and is a member of the Defense Acquisition Corps.

With more than 25 years of service in the Navy, Yokoyama spent more than half of his career deployed overseas flying off of aircraft carriers or conducting sensitive reconnaissance missions.

In 2016, Yokoyama volunteered to deploy on a one-year assignment to the U.S. Embassy, Baghdad, Iraq, where he served as the senior military advisor to the Iraqi Minister of Defense in the fight against ISIL terrorists.

“Having spent over a year in Iraq where I saw firsthand the many challenges our warfighters and coalition partners face each day, I’m looking forward to doing all I can to advance the work being done here at SSC Pacific,” said Yokoyama, who took command May 3. “The scientists and engineers at SSC Pacific are some of the smartest people on the planet, and I share their longstanding commitment to ensuring our warfighters have every possible advantage to complete their mission and return home safe.”