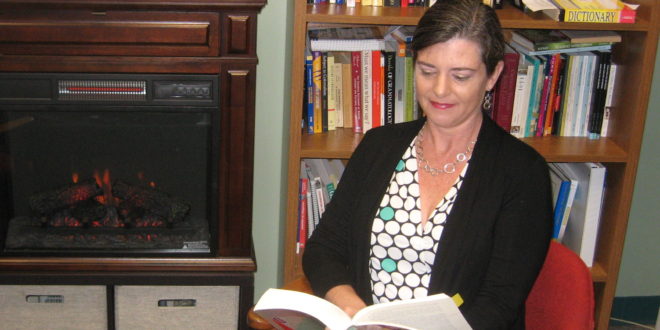 Dr. Julie Brannon preparing for Jeopardy! "You can study only so much for this.''

Like many of those who watch the popular game show Jeopardy!, Dr. Julie Brannon has a tendency to blurt out the response. Now, however, since she is actually going to be on the show work on timing and button mashing is in order.

Dr. Brannon, professor and Chair of English, has been called as a contestant on the highly popular game show where participants get answers or clues in categories from host Alex Trebek and must respond correctly by forming their answer as a question.

Contestant: “What is Tallahassee?’’

“I do tend to blurt out the answer, but I usually try to wait like they do on the show,’’ Dr. Brannon said. “You have to wait until (Trebek’s) done talking and then it’s all about the button mashing. It’s about timing the click in a certain window so you can you buzz in first. You don’t want to be too fast because they can lock you out for two seconds if you do it too early. There’s a trick to it. I find that people who have too much arm motion are too late.’’

Dr. Brannon got the call just last month after nearly 18 months of waiting following the tryout and audition phases, her second attempt at making the show (the first was 10 years ago).

The tryout, she said, begins with an on-line 50 question test that must be completed within a specified time frame, and should you pass that you are asked to go to an audition (hers was in Tampa).

“It was in July of 2015,’’ she said. “I did the audition and once you get past that stage they ask you to play a mock game with the other applicants and they do an interview.’’

If you pass those stages, your name goes into a pool for 18 months; if you don’t get called you are allowed to try again.

“My 18 months was just about up,’’ she said. “They called last month and I didn’t even register what it was. He said he was from Jeopardy! and it was only after the phone call I was ‘oh my gosh, I’m going to Jeopardy!. This is weird.’’

Heading into the game, which will be televised in March or April of 2017, Dr. Brannon has a good handle on what categories she would like to see … and those she wouldn’t.

“Geography, presidents and political figures, those are my two weakest points,’’ she said. “I’m slightly better in things like art and opera and those things. Obviously, if literature comes up I am good and I’m strong in natural sciences, animals and word categories where they ask you to come up with words that have certain endings. Anything to do with languages and world cultures, I’m OK.’’

Once the show has been taped, Dr. Brannon will participate in the time honored idea of not revealing the results.

“They have pretty strict guidelines about social media, for example, of what you can and can’t say,’’ she explained. “They are pretty hush-hush about it and it’s a pretty long period of time to say nothing. What’s fascinating to me about that is the people who go on the show uniformly obey that. It’s become such an institution culturally, people don’t’ want to do anything to mess it up.’’

About the only drawback to the mid-December adventure is the timing. Filming is during finals week.

“The end of the semester is crazy,’’ she said. “There is so much grading and projects that have to get completed before the semester is out. I have two finals to give during that time. I’ve been making arrangements for other people to cover it. The students are doing presentations I made arrangements for (Media Services Manager) Greg Minton to film it for me so when I get back I can see the presentations.’’

Her students have been enthused about her appearance.

“I wanted to move the finals to see their presentations,’’ she said. “I’m disappointed to not see the projects they have been working on all semester and have put a lot of work into, and that I won’t be there. They thought it was kind of neat, though.’’

And, heading to the taping, her only pressure is from within.

“Yes, mostly from myself,’’ she said. “It’s all about the experience and about being on the show and meeting Alex Trebek. And, I’m such a nerd I’m really excited about that. At the same time, I don’t want to embarrass JU. I can’t say Jacksonville University on the air but when the show finds out the exact air date they encourage people (to get the word out). I know that people I know will be watching so I want to represent JU well, but I’ll probably go up against some Ken Jennings (once of the greatest champions in show history) guy and never get to answer a question.

“I keep telling my family that as long as I make it to final Jeopardy! and make enough money to pay for the trip out there then I’m good,’’ she said. “Hopefully, if the Gods are smiling upon me, I will have to go back. We’ll see. The other upside is maybe I get there the first day and don’t win, I have a day in Los Angeles to be a tourist and gawk at movie stars.’’