A recent community clinical experience for the Brooks Rehabilitation College of Healthcare Sciences School of Nursing Community Health Nursing Course not only was fulfilling for residents of Arc Jacksonville Village, but a highly successful, humbling and valuable pilot project for School of Nursing students.

“In the Community Health Nursing Course, we assign students to all kinds of agencies around Jacksonville for their clinical 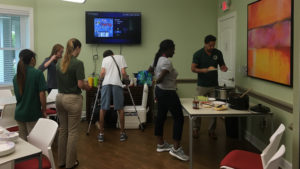 experiences,’’ Assistant Professor of Nursing Nancy Robinson said. “They spend four days working with a nurse in the community settings or working with faculty in health education or health promotion projects.’’

Robinson, coordinator for the course, said from start to end the project fit well with the course goals.

“One of the tenets of good community health is to work in partnership and collaboration with folks instead of doing for them,’’ she said. “You work alongside or with people, empowering them to have more strength in their daily lives. The intention of the clinical placement is to have students immerse in the community and engage with the population, becoming comfortable with the residents outside of an acute care setting. This gives a sense of the context clients are coming from come when you (the nurse) are in the Intensive Care Unit of Emergency Room.’’

For this project, made possible by funding through The Riverside Hospital Foundation Innovation Grant to establish internships where nursing students will be in direct contact with adults with I/DD, three current Community Nursing students and one graduate student, Jessie Bergman, worked under Assistant Professor Pam Swan.

“It’s successful, beautiful and there is a lot of planning around the needs of these adults who are having independent living for the first time in their lives,’’ Robinson said. “Our initial idea was to do a collaborative health education project with some of the residents who live there so the residents alongside the nursing students would be planning and implementing, rolling out a health education program for the community.’’

Upon arrival at the community, Professor Swan and the students were given a tour which included a look at living arrangements and input from the residents as to what they wanted to learn.

“We went with a couple of ideas we felt were important to teach and asked them. The thoughts we had were very similar to the thoughts they had and wanted. Food safety was one of the things they wanted to learn about, that’s where we went,’’ Swan said. “We split the students up and each took a section. They had portion control, pantry or fridge (refrigerator), healthy snacks, eat more, eat less … the residents then helped create the project.’’ 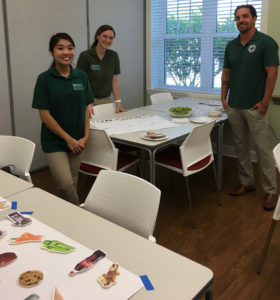 Part of what was created during the interactive work was three board games/projects – one created by each student: food storage, healthy vs. unhealthy foods and portions. A post-test was given toward the end of the project.

“The residents were very cordial and very willing to take the test,’’ Swan said. “They went around to different stations and were able to verbalize a lot of the things they learned.’’

While community residents were overjoyed with the project, and offered many ideas for future work, the students also were moved.

“It was so humbling,’’ Ms. Bergman said. “They are so proud of their community and having a space to call their own. They just lit up and were so happy to be able to show it off to us. They are the sweetest people and were grateful to have us there. It was bittersweet on the last week.’’

She now is working on formulating lessons learned for students in the future who will go to the community.

“The students enjoyed it and felt the work they did had an impact,’’ Swan said. “To watch the interaction between them I found to be fun and they learned a lot. The students got something really wonderful out of it.’’