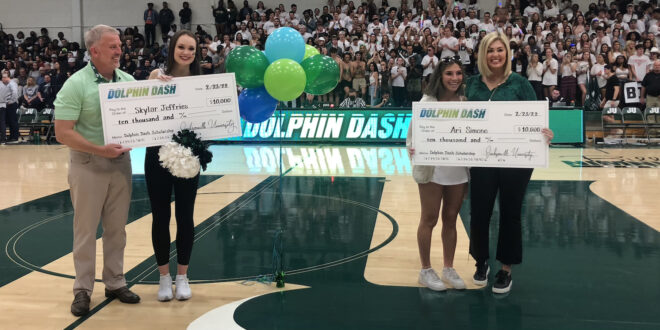 Board of Trustees provides three students with $10K scholarship

For three Jacksonville University students, their participation in the Dolphin Dash annual giving campaign turned into a transformative $10,000 scholarship for each of them.

Thanks to the generosity of the Board of Trustees, three $10,000 scholarships were unlocked once 750 JU students donated to the campaign. The Dolphin Dash Trustee scholarships were awarded to student leaders in philanthropy who volunteered to serve as a Dolphin Dash Champion, a social media advocate or who supported one of the challenges throughout the week.

In addition to the three scholarships, members of the Board of Trustees participated in Dolphin Dash, raising nearly $1 million. While the Trustees supported all campus causes, most chose to invest in incentive funding for the campaign, used to inspire and motivate student philanthropy. Student groups received additional funding if they raised the most money or rallied the most donors in their category.

“The evolution, growth and results of Dolphin Dash, especially over the last two years, have been incredible,” said Trustee John Miller. “JU has inspired university supporters, alumni, students, parents, faculty and trustees to get involved in this unique program.  The short and long-term benefits of this type of engagement and support will add so much value to the JU experience for everyone.”

The three winners received the surprise of a lifetime, receiving the $10,000 check when they least expected it.

Ariana Simone and Skylar Jefferies thought they were just attending the River City Rumble men’s basketball game against the University of North Florida.

But when they heard their names announced as scholarship winners during the game, the two realized something more was going on. Board of Trustees members Jamie Shelton and Audrey Moran ‘10 stood on the court, ready to present the checks to Simone and Jeffries.

“Hearing my name announced at the final men’s basketball game of the season was a moment that I will truly never forget,” Simone said. “Out of every student here who participated, I was honored to receive this award, which I am so grateful for.”

Jefferies added: “I was in complete shock hearing my name get called,” she said.

“Jacksonville University provides so many opportunities for us and when we are given the opportunity to help campus improve and raise money to provide new opportunities for students, we are eager to be part of that, Simone said. “My chapter is filled with strong women who share a love and passion for Jacksonville University and for helping others. Seeing parents, students, alumni, and others come together to raise money for an organization is something that I want to be part of, and I am so grateful for being able to donate on behalf of myself and my chapter with or without my scholarship.”

Jefferies said she was proud to support the JU Dance team and her sorority during Dolphin Dash as a way to give back.

“Our dance team doesn’t get much through funding and we rely a lot on donations,” she said. “Also, we have many alumni who donate to Alpha Delta Pi so donations from students feel like a thank you to these generous individuals.”

Trustee Roseann Duran said she and other trustees were proud to support Dolphin Dash, and it’s especially rewarding to see strong student participation.

“It’s incredible following along with the campaign throughout the week and seeing how involved the students get in fundraising and I’m happy to be able to invest in something that inspires students to get involved,” Duran said. “These are the University’s future alumni and it’s wonderful to see them take such an active role in philanthropy.”

Orthodontic student Dr. Halle Schaf is the third scholarship recipient. She decided to support the School of Orthodontics through her donation.

As her 1 p.m. class was beginning, Schaf was surprised with the news of receiving the $10,000 scholarship.

“I’m still so overwhelmed with excitement about the scholarship,” Schaf said. “I was in total shock when I heard my name as the recipient of the $10,000 scholarship. I decided to support Dolphin Dash to show my pride for Jacksonville University, especially by donating to the Orthodontic program I am currently attending. I did not expect to receive anything in return for participating in Dolphin Dash .”

All three students expressed their gratitude for the scholarships, adding that it will make a huge difference in paying for their education.

“It is truly hard to put into words how much receiving $10,000 dollars means to me but to say the least, this money has helped me become one step closer to my future and goals,” Simone said.

As an orthodontic student, Schaf is working on her third degree following her undergraduate degree and dental school.

“Receiving this scholarship is by far the most exciting surprise I’ve ever received,” Schaf said. “I am so grateful to be given this money to help pay my tuition costs. I want to give my sincerest thank you to all the Trustees that have gifted me with this scholarship.”