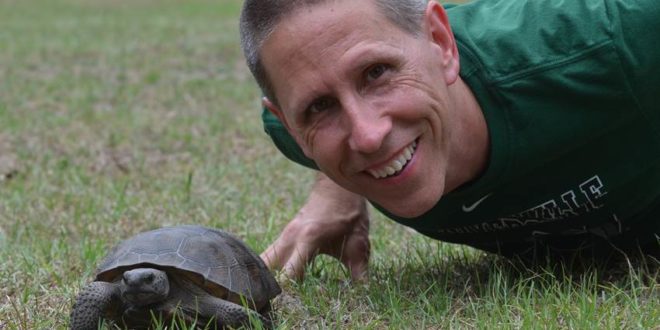 As the endangered species list continues to grow, Dr. John Enz has made it his mission to observe why certain animal populations are declining in various parts of the United States.

“This bee was common in the eastern United States and found in 28 states up until the late 1990s,” said Dr. Enz, who has been at Jacksonville University for nine of his 31 years a professor. “Now, it is only found in a handful of states and its range has decreased by 85 percent with population estimates decreased by 95 percent.”

While writing a dissertation on bees in the 1990s, he observed an abundance in the rusty patched bumblebee population, but the population has been on a steep decline ever since.

The rusty patched bumblebee’s native habitat includes the prairies of the upper Midwest and grasslands of the Northeast. While researchers aren’t sure why this bee population is declining, they have identified a combination of various contributing factors.

“Most of their original habitat has been converted to other uses such as agriculture, cities, and roads,” said Enz. “With agriculture and lawns come the use of pesticides which can have lethal effects on these bees.”

Conservation groups have shown interest in finding remaining populations of the species to analyze their habitat uses. Efforts from this past summer yielded results showing that the species is using remnant patches of grasslands and forest edges in wild natural areas such as National Parks and even at times urban regions.

“The coming year’s work will concentrate on this effort to document where this species still currently exists and will involve hiking and surveying many miles in northwestern Virginia and Eastern West Virginia,” Dr. Enz said.

With the help of six students majoring in Biology, Dr. Enz will assist in surveying probable habitats where this species may likely still be found.

“The students will gain experience in survey design, bumblebee species identification, and work within a network of scientists and conservationists,” said Dr. Enz.

Dr. Enz has also studied the gopher tortoise for the past three years in Cumberland Island, Ga., and he estimates that the project will take another three years to complete.

“Until my research began, no studies or information existed on these gopher tortoises,” said Dr. Enz. “The information on this population that I am collecting is new to science and vital to their management and survival.”

Though it is listed by the state as a threatened species, it is not listed as endangered. This may change as their habitats and populations decrease.

Gopher tortoises are essential for the environment since they are the only burrow tortoise in the Eastern U.S. and are considered a “keystone” species. Their burrows foster other species such as mice, toads, lizards, frogs, burrowing owls, Carolina wrens, American robins, snails, crayfish, snakes, and numerous insects.

“In Florida and Georgia, there has been a 70 percent decline in available gopher tortoise habitat since European settlement and these tortoises are vital to the longleaf pine, coastal grassland, and scrub-type habitats in which they live,” said Dr. Enz.

Any type of information about the current status, distribution, density, and impacts that may affect the species is imperative to the long-term stability of the gopher tortoise.

“Currently we estimate a viable, reproducing population of about 250 tortoises encompassing all age classes: juveniles, subadults and adults,” said Dr. Enz. “Going forward, we have obtained funding to acquire cutting edge miniature GPS data loggers and radio transmitters to attach to the tortoises to track their movements throughout the island.”

Researchers have observed that behavior from mainland populations is different and speculate that the Cumberland Island population may be genetically distinct as a population.

“Data on the movement patterns of adult gopher tortoises does not currently exist for isolated island populations and will be imperative for proper conservation and management of this species,” said Dr. Enz. “In addition, we will be collecting blood samples for comparison to mainland populations.”

The gopher tortoise population may be able to be stabilized in the future if their declining population is observed and protected.

“Over the past 3 years, we have located and identified gopher tortoise burrows throughout the island, GPS mapped these burrows and characterized the population size and age structure,” said Dr. Enz.  “Currently, we estimate a viable, reproducing population of about 250 tortoises encompassing all age classes: juveniles, subadults and adults.”