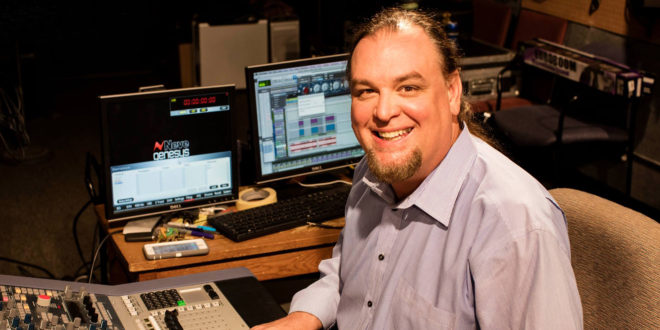 Dr. Tommy Harrison may have just changed the landscape as to how potential students view the music business arm of the College of Fine Arts.

Harrison, Professor of Commercial Music, Music Business and Recording, this week became one of a rare breed in academia as he signed a record deal with 405 Hollywood/Atlantic Records (405 Hollywood is an imprint for Atlantic Records).

The contract calls for Harrison to be involved in three recordings to be released next year, with his own Tommy Harrison Group, and Glutton, a metal band in Utah, and puts the professor in exclusive company with the dual professor/music contract designation as not too many have been able to combine the two.

“I think that’s probably true,’’ Harrison said this week before heading to perform in Denver. “It’s exciting.  This is a game changer as far as Jacksonville University and the music business program is concerned, and will be something our students really enjoy.

“It makes this situation unique because if you find other music faculty around the country, and you can name your school because there are plenty of reputable, fantastic music business schools in America, you’re probably going to find some faculty members who had some sort of contract 20 years ago, who have done some extensive regional or national touring, or who was a songwriter whose songs were performed by other people.’’

Until this week, Harrison counted himself among that crowd.

“Prior to this week, I could say I was a regional touring person in the southwest because my (former) band in Colorado (Dogs of Pleasure). The band was significantly popular in Denver, and we played from Los Angeles to Phoenix to Cheyenne (Wyo.). Prior to that group, I had worked with a major producer and was signed to an independent label very young,’’ he said. “Prior to this deal with Atlantic, I could have been known as having an indie deal, which wasn’t very good. Then I started producing and engineering in Los Angeles, and which hindered my performing career.’’

He then turned to recording studio work and now is changing course again.

“With this contract, it changes everything,’’ he said. “We at JU can tell people interested in the music business that they not only do they study with someone who had previous success, we have someone who is actively signed to a major recording contract on our faculty.’’

Working through the agreement with 405 Hollywood/Atlantic Records has given him a front-row seat into the inner workings of the industry and he is “seeing first-hand what industry practice is.”

“Outside of the big four cities, New York, Los Angeles, Miami and Nashville, which all have the run of the music industry, it’s different because we’re in Jacksonville. There are people who want to study the subject with someone who is actively doing it, such as myself, who don’t want to live in any of those four locations for a variety of reasons,’’ Harrison said.

On a personal level, Harrison describes the contract as “very big’’ as he wasn’t sure signing such would happen.

“I had considered myself a producer who is an academic, researcher and composer, who continued to play guitar as needed until about two years ago,’’ he said. “Before my performing career started to have a rebirth, the idea of getting a recording contract like this was something I didn’t quite think was possible.’’

He is quick to point out his relationship with Utah musician Raven Cain also played a more than minor role in the Atlantic Records deal.

“One of the things that led to me signing this contract was my relationship with Raven Cain.  I think of friendly, energetic personality makes people eager to work with me, more than if I were a big jerk. If I were a jerk to Raven when we worked together years ago, this would not be possible. I am very grateful of the opportunity now.’’

Harrison said he won’t be touring much during the school year which will, of course, keep him on campus. When away, he already is working up ideas to keep his students involved.

“When I’m not on campus I am dying to have Skype interviews with industry professionals as I’m on the road,’’ he said. “For example, for the show in Denver, I’ve made arrangements for two guys who work for touring companies to meet me at our class time at an office and we’re going to sit in front of my computer.  It’s going to be question and answers meeting about touring, and my students are going to be on the other end of the line asking the questions. You can’t get that unless you’re in one of the four major cities, because you can go down the street and get your answer. We’re actually taking the program on the road by doing it this way, getting an insight into the industry that is tough at our peer institutions.’’