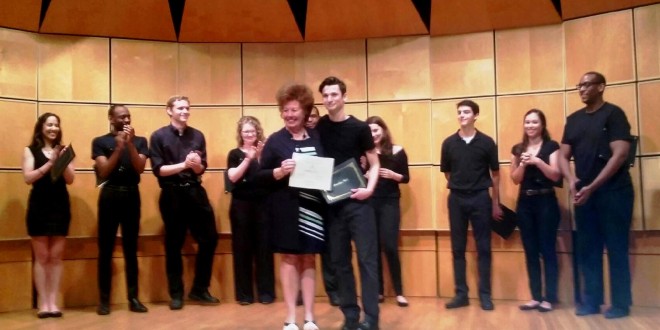 A little Shakespeare, a bit of Neil Simon and a lot of talent are sending Jacksonville University freshman theater major Brandon Paris to the finals of a national drama competition in May.

Paris recently won first place at the Drama Competition for the National Society of Arts & Letters’ East Florida Chapter, taking home $2,000 at the event at Lynn University in Boca Raton. Now, he moves on to the national 2015 NSAL Drama Competition May 27-31 in St. Louis, where he could win $10,000 if he is champ.

Performing two contrasting monologues from a list of modern and classic playwrights, Paris impressed the judges as Hamlet in Shakespeare’s “Hamlet” and Ira in Neil Simon’s “Laughter on the 23rd Floor.”

Paris said he was humbled to have won, and plans to represent JU well in St. Louis.

“A huge thank-you to my past trainers and the amazing help I’ve received from the Jacksonville University Theatre Program,” he added. “Especially to Prof. Deborah Jordan and local director Dave Alan Thomas.”

Jordan, Associate Professor of Theatre Arts and Paris’ coach, said his win speaks to the quality of training JU actors receive in the Theatre Program.

“We continue to provide opportunities for our students to audition and perform outside of JU, as it is more about ‘Who knows you’ than ‘Who you know’ in this business,” she said. “As a freshman, Brandon has proven to be a very ambitious and gifted performer, and I see great things in his future in the business.”