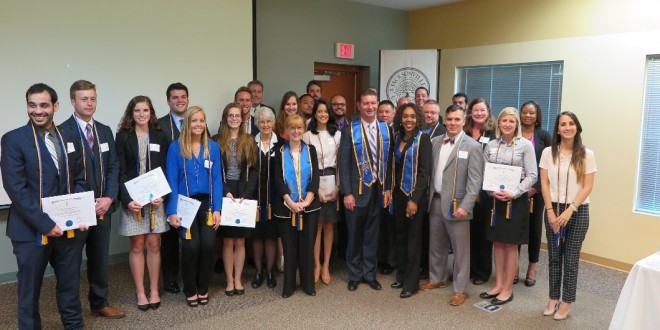 The Jacksonville University chapter of Beta Gamma Sigma (BGS), an international business honor society, has inducted 52 new members to its chapter, including 13 undergraduates and 39 graduates.

“Here in the Davis College of Business, we recognize excellence and believe that to each of us, much has been given and of each of us, accordingly, much is expected,” said Dr. Angela Mattia, Assistant Professor of Decision Science & Information Management and the chapter advisor for the Davis College of Business BGS Chapter. “The new inductees accept our high standards and agree to let honor, wisdom and earnestness guide and stimulate their personal conduct every day of their life. We are so proud of each and every one of them for committing to these guiding principles for the rest of their life”

Jacksonville University’s chapter has grown to more than 275 inducted members since its inception in 2012. In addition to those inducted, an honorary membership is annually awarded to a member of the Jacksonville business community. This year’s recipient was Tony Park, Executive Vice President, Chief Financial Officer of Fidelity National Financial Inc. Park is an Executive MBA graduate of the Davis College of Business.

“Jacksonville University and its Davis College of Business EMBA Program is where I learned to be a leader,” said Park in his acceptance speech.

Each of the newly inducted members was presented with graduation cords, along with a certificate of recognition of his or her induction into the honor society.

Beta Gamma Sigma recognizes excellence among all of its chapters, and only schools that have been accredited by the Association to Advance Collegiate Schools of Business (AACSB) are eligible for membership. BGS currently has 546 active chapters and has inducted more than 750,000 outstanding students into membership since its founding in 1913. Members currently reside in all 50 states and more than 160 countries around the world.