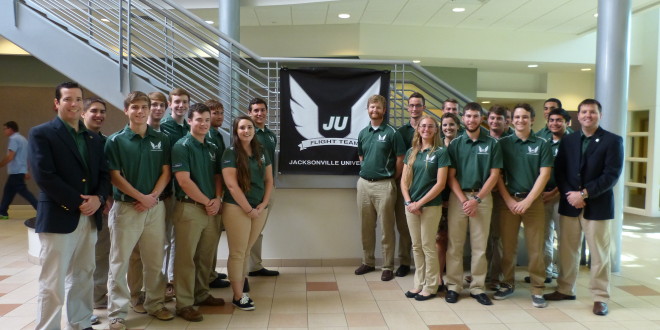 With the finish, host site JU earns an automatic bid to the National SAFECON in May 2015 at Ohio State University in Columbus. The team will compete against the top 30 teams in the nation.

“The team’s success is the result of the hard work and dedication of team members and the dedication of the team advisors,” said Matt Tuohy, newly named director of JU’s Davis Aviation Center in the Davis College of Business. “Their success also speaks volumes for the quality of the flight training that students receive at JU through Aerosim Flight Academy. The JU Team is indebted to its sponsors Michael McKenny, Sky Harbor Aviation, Pilot Pen and Aerosim Flight Academy. This feat would not have been possible without their continued generous support.”

Flying events were conducted at Cecil Airport, and Ground and Social events were held at the Wyndham Hotel and the Jacksonville University campus.

Team captain Brett Wickizer and Co-captain Zach Pfisterer led the team of 20 members that is assisted by advisors Dr. Rhett Yates and Prof. Chad Kendall. In addition to competing, the students, led by Maria Figuerado, the head of the host committee, planned, coordinated and executed every event. The overall competition sponsored by jetBlue and the Jacksonville Aviation Authority received accolades from every level, including the NIFA regional representatives and judges.

Jacksonville University’s Davis Aviation Center has been preparing students for business careers in the aviation industry for more than 30 years. In 1996, Jacksonville University established a one-of-a-kind training partnership with an airline’s training center, Aerosim Flight Academy (formerly Delta Connection Academy), to educate and train future airline pilots. Jacksonville University is one of the first 30 universities in the world with bachelor degree programs accredited by the Aviation Accreditation Board International (AABI) and one of 36 universities in the U.S. selected by the Federal Aviation Administration to offer an Air Traffic Control Program under the FAA’s collegiate training initiative (CTI). To view pictures and videos from the Flight Team competition, visit us online on Facebook and YouTube. To follow aviation at JU, visit http://aviation.ju.edu or call (904) 256-7895.