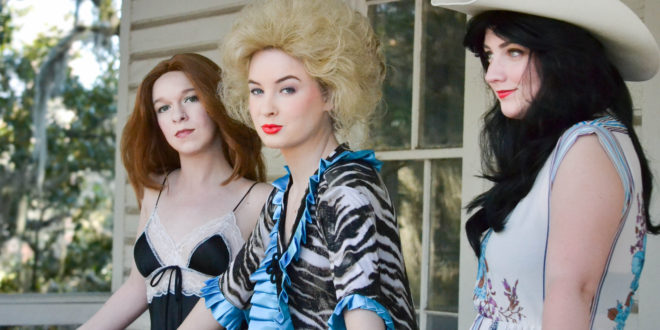 They’re gonna whomp and stomp and whoop it up in “The Best Little Whorehouse in Texas” March 9-12 at Jacksonville University’s Swisher Theater, fully loaded with a strategically choreographed locker room dance scene revealing another side of JU’s football team and its student veterans.

The aim of the College of Fine Arts’ Theater and Music Theater divisions is to “blow the roof off the place” with a non-stop Lone Star hit parade, said director Deborah Jordan. The Associate Professor of Theater was in the play herself more than 30 years ago, in her very first musical.

“I have been wanting to do this show for years at JU,” she said. “I always envisioned using our very own JU Dolphin Football Team players for ‘The Aggie Song.’ I really think that song and dance number is going to bring the house down.”

It’s the late 1970s in the fictional town of Gilbert, Texas, where the legendary Texas brothel “The Chicken Ranch” (so-called because its patrons often paid with chickens during hard times) has been operating since the 1840s. Under the proprietorship of madam Miss Mona Stangley and protected by a friendly sheriff, Ed Earl Dodd, the Chicken Ranch carried out its illegal business with impunity for more than a century, thanks to the winks, nods and dedicated patronage of local law enforcement and government officials.

That is, until it was targeted by the crusading and attention-hungry TV reporter Melvin P. Thorpe, and eventually shut down.

Winner of six Tony awards in 1979 and released as a hit movie in 1982 with Dolly Parton and Burt Reynolds, the production is based on a true story by Larry L. King that was inspired by the real-life Chicken Ranch in La Grange, Texas. The rousing musical comedy includes a lively score by Carol Hall featuring memorable, folksy country western tunes and upbeat ballads.

Musical Director Jay Ivey, Assistant Professor of Voice and Musical Theater, said the show works as a great instructional tool for students, who need to be literate in various styles to be successful in the ever-changing business of Broadway.

“This show is a great way for our students to become well-versed in this genre,” he said. “This show, when it premiered on Broadway, was a direct answer to the burgeoning age of rock musicals and traditional shows. It is the first successful foray into country musicals in the history of musical theater. Having run for over 1,700 performances, it was a welcome breath of fresh, country air.”

Jordan holds a special place in her heart for the “scandalous” musical.

“I did this show originally in Texas City, Texas, and we had some real-life Texas Aggies in the cast. Yep, I was a [Chicken Ranch lady]…  Our Sheriff Ed Earl Dodd was from one of the Broadway tours, and our choreographers were from the original Broadway cast. I remember being in high school, living in Houston when the Chicken Ranch controversy hit.”

Jordan says audience members should be prepared for some entertaining — and suggestive – songs, particularly the innuendo-filled “The Aggie Song,” during which male cast members will appear behind a scrim – a piece of opaque fabric that when lit from behind will offer silhouettes of the boisterous activity.

“In a show dominated by women, this will be the men’s time to shine!” she said.