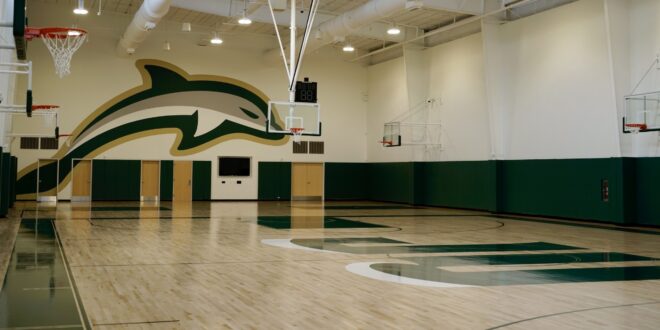 In a triumphant moment that was years in the making, Jacksonville University’s men’s and women’s basketball teams finally got their first look – and first shots – inside the just-completed Basketball Performance Center.

The facility, where both basketball teams will hold the majority of their practices and training sessions, helps elevate the program to a more prestigious level. It also solves practice scheduling conflicts that occurred when the basketball and volleyball teams shared Swisher Gym.

It features a full court, half court, weight room and coaches offices and will have direct access to the adjacent Swisher Gymnasium.

Balfour Beatty served as the construction partner on the project.

While the project broke ground in 2020, President Tim Cost and Athletic Director Alex Ricker-Gilbert have been dreaming of building such a facility for years.

“Every day of our tenures we’ve spent brainstorming about this facility,” Ricker-Gilbert told the basketball teams before entering the performance center for the first time.

The goal behind the facility was for it to be a home away from home for Dolphin basketball student-athletes, Ricker-Gilbert said. As the teams shot around and filmed it to show family and friends following the Jan. 25 reveal, it seemed it was already beginning to feel that way.

“We’ve been hearing so much about it and to finally get to see it and experience everything that not many other programs have, it’s big-time for us for sure,” said junior guard Kevion Nolan. “It gives us another area to be able to really lock in and focus on our craft. We have to share the gym so much, it’s hard to get in exercise sometimes. Now with 24/7 access, it’s like our own little home, it’s everything you could ask for.”

“It’s going to help us prepare better,” Davis said. “The weight room is right there, the coaches’ offices are there, I just feel like it’s going to be good all around because we will be able to connect with our coaches better.”

The state-of-the-art practice facility will only aid the Dolphins’ ability to recruit and develop top talent.

Cameras are installed around the courts and practice footage can be immediately broadcast on televisions alongside the court so teams can review film in real-time. Speakers are installed on the court and in the gym with bluetooth access for student-athletes to play music from their own devices while practicing or training.

Coaches’ offices are sound-proofed, so sound from the court doesn’t disturb work or meetings.

“We’ve got what we need to take these programs to the next level,” Ricker-Gilbert said. “Now let’s go do it.”

See a gallery of the Basketball Performance Center below: