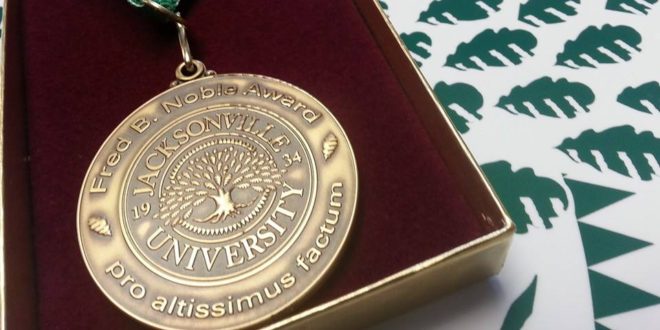 President’s Award for Outstanding Leadership/Undergraduate: Hanna McMahon graduated magna cum laude and Phi Kappa Phi, earning a bachelor’s degree with a double major in accounting and finance. She is president of the Accounting Club and Student Athlete Advisory Committee, as well as a member of the Beta Gamma Sigma International Business Honor Society, National Society of Leadership and Success and JU Student Investment Fund. She is a member of the JU team that this year won Florida’s Chartered Financial Analyst Institute Research Challenge, and then represented the University well as state champions at the Americas Regional Final of the CFA Institute Research Challenge.

Florinda Mangani graduated with a master’s degree in speech-language pathology. She is active in the JU National Student Speech Language and Hearing Association Chapter with her peers. She is a member of the Psi-Chi International Honors Society and the Sigma Alpha Lambda National Leadership and Honors Organization. Florinda is fluent in English, Albanian, Greek and Italian. In the middle of her graduate program, she faced a great challenge, as she was diagnosed with cancer. Throughout her multiple surgeries and cancer treatments, she continued her studies, and graduated on time with her peers.

University Award for Outstanding Service and Co-Curricular Involvement: Sydney Fritz graduated with a bachelor’s degree in finance. She has been President, Vice President of Finance and Philanthropy Chair of her sorority, Alpha Epsilon Phi. Her co-curricular involvement includes volunteering as a leader and mentor at new student orientation; taking part as a member, fundraising chair and executive committee member of the varsity shooting team; and two on-campus employment leadership roles in Student Affairs and as a Davis Student Commons supervisor. She is a member of the Student Alumni Association and assists in expanding and deepening the connection between alumni and current students.

Fred B. Noble Gold Medal for Scholarship: Savannah Bates and Melissa Spaulding were recognized with the University’s highest academic award, given to the graduating seniors with the highest cumulative GPA.

Bates graduated summa cum laude and Phi Kappa Phi, with a 4.0 GPA, University Honors, as well as department honors in mathematics, with a bachelor’s degree in mathematics. She is passionate about research and has been admitted to and completed the highly competitive “National Science Foundation Research Experiences for Undergraduates” summer program at two host universities. She has also participated every year in the International Mathematics Competition in Financial Modeling, this year as a member of a JU team that earned high honors at the global competition. She is immediate past president of the Green Key Honorary Leadership Society, and a member of Phi Kappa Phi, Sigma Alpha Pi and Who’s Who.

Spaulding graduated summa cum laude and Phi Kappa Phi, with a 4.0 GPA and a bachelor’s degree in English. She is an exceptionally gifted prose essayist, and presented successfully on “Modernism in Literature” at this year’s National Conference on Undergraduate Research at the University Of Memphis. Melissa has helped revitalize The Aquarian, JU’s literary and arts magazine, for which she serves as social coordinator. She also works in the JU Writing Center as a tutor, editing students’ papers and strengthening their writing skills. Melissa is an active volunteer, donating her time and talent to the American Cancer Society and at Trinity Christian Academy.

Professor of the Year: Dr. Nisse Goldberg, associate professor and chair of the Department of Biology and Marine Science. She teaches courses in plant sciences, ecology and marine sciences, and was honored with the Jacksonville University Faculty Excellence Award for Community Service in 2010, and for Research in 2014. Dr. Goldberg has published in the journals Wetlands, Plant Ecology & Diversity, Florida Scientist, and The Journal of the Scholarship of Teaching and Learning.