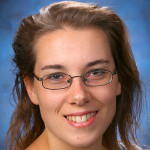 Growing success with Jacksonville University students in the Davis Aviation Center has been a common practice. From students interning with international airlines to others who are getting their feet wet in the airline industry, JU students have been soaring to new heights.

Kelly Jeanfavre came to Jacksonville University, like many students from the New England area of the United States, to escape the cold winters, but more than that she joined Honors Program. Little did she realize within four short years, she would be working for a national airline during its inaugural year of regional flights out of St. Augustine, Florida.

Within months of graduation, Kelly Jeanfavre, an Aviation Management major from Connecticut received a call about a position with Frontier Airlines at Northeast Florida Regional Airport in St. Augustine. Like many in the airline industry, Jeanfavre would need to begin at the ground level as a ticket agent as a way to jumpstart her prospective career in airline operations. She is one of three JU students who are currently employed with the airport.

“No one came in with previous airline experience, so I learn something new every day,” explained Jeanfavre. “It is really neat to be working with a large commercial aircraft.”

The operation is an initiative of Frontier Airlines, a low-cost carrier based out of Denver, Colorado, as they look to expand into east coast underserved markets. St. Augustine was the first commercial route they opened up with service to Southeastern United States from the new full time crew based out of Trenton, New Jersey.

“Right now, they have three flights going out and coming in of the airport from St. Augustine to Trenton,” Jeanfavre elaborated. “In September we are expanding to Dulles Airport in Washington, DC.”

Last summer, Jeanfavre completed an internship with the St. Augustine Airport, where she assisted in updating the security plan mandated by the Florida Department of Transportation. During this time, Jeanfavre became familiar with airport operations and administration.

Discovering the exciting and interesting nature of the aviation industry, Jeanfavre decided that there were “many different ways you could work in the airline industry…I discovered that I loved it.” Attributing the close-knit group of classmates within the Aviation program at JU, Jeanfavre felt that the department “was a second family.”

One of her most interesting courses was in Aviation Economics, spurring her interest in business. Jeanfavre knows that furthering her education even more will make a more marketable candidate for airline management, as she has decided to pursue her MBA from JU this fall.

“I never had business classes in high school, and I really enjoyed all of the business courses I took during my undergrad degree,” Jeanfavre said. “Having a background in business will make me multi-faceted and show the versatility to build transferrable skills.”

“We couldn’t be more proud of Kelly and how she has taken the initiative to jump start her career in St. Augustine,” commented Dean Don Capener of the Davis College of Business. “She is one of our top students and we know she has the ability to move up the ladder quickly.”

During her undergraduate program, Jeanfavre was involved with Women in Aviation, American Association of Airport Executives, Brumos Circle of Excellence, Green Key and was named to the Top 40 Business Students at Jacksonville University in Advantage Magazine in 2013.