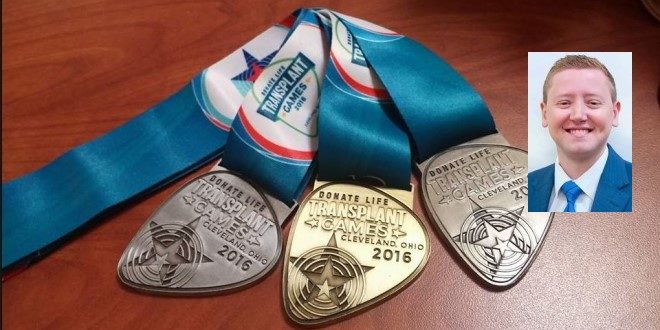 An adverse medical diagnosis can lead some people to live their lives limited by their problem. Others, however, choose to soar beyond their health issues.

In 2012, Higgons was battling cystic fibrosis, a disease that affects the lungs, pancreas, liver, kidneys and intestine, resulting in difficulties with breathing and frequent mucus build-up. To remedy this, he underwent a heart procedure and a double lung transplant within the span of nine days. Although he calls the lung transplant a Christmas Miracle, he had some post-surgery difficulties. As a result, he couldn’t come to campus during his final semester of college in fall 2013.

However, with the help of his aviation professors and other dedicated University faculty, he completed his assignments as he recovered in a hospital bed, finished his degree, and embarked on living life beyond the typical boundaries of his condition.

After graduating, Higgons became a business owner and a Transplant Games competitor. When browsing the internet one day, Higgons came across the Transplant Games, a competition that he would hold dear for years to come.

Curtis competed in the 2016 and 2018 games in events including bowling, darts, Texas Hold ‘Em, and swimming, winning 13 medals between local and world venues.

“It was just a matter of me figuring out what it was, asking around and now whenever I go to a games, not that I know I’m going to win medals, but I know I’m competitive, so it’s a lot of fun, and you meet people from all different walks of life,” Higgons says.

The former Aviation Operations and Management major also picked up a business minor in the event that his cystic fibrosis hindered his career in aviation. He created the digital media business, Limitless Studios, to give him more financial security after having to be fired or quit from every job that he had due to his frequent illness. Now, he works from home supporting other small businesses as well as his own, referring to himself as a “lungtrepreneur.”

“I actually started that five years ago,” Higgons says. “It was something that I made up about how I had the lung transplant, and I’m an entrepreneur at the same time. Everyone does the play on words, and I market it around cystic fibrosis aspect more so than the lung transplant aspect of it.”

The lungtrepreneur also pilots a couple of other ventures. He is co-owner of T-shirt business, Do You Even Apparel, and the co-founder of Tranquility, Inc., an organization that helps parents, teachers and community leaders overcome communication and wellness deficiencies that adversely affect children.