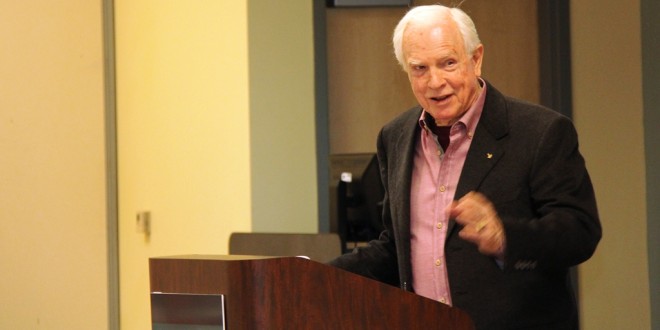 Astronaut David Scott, one of 12 to walk on moon, inspires students at Aviation luncheon

JU Aviation and other students received a rare glimpse into the world of space exploration Tuesday, Jan. 28, when Apollo 15 commander Col. David R. Scott, one of only 12 people to walk on the moon, took questions at an informal luncheon and reception. (View a large Facebook photo gallery here.) 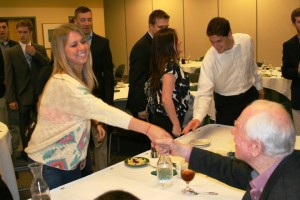 Scott, who led the Apollo mission in 1971, was accompanied at the event at the Davis College of Business by his wife, Margaret “Mag” Black-Scott, JU Board of Trustees Vice Chair, who received an MBA from JU in 1985. David Scott was bestowed the University’s first honorary doctor of science and technology degree in May 2013.

Amid humorous stories of the Mercury and Gemini early space missions, Scott offered insights into what it will take for the next generation to make broad technological advances. Later, he toured the Davis Aviation Center and its $500,000 Level 5 CRJ700 flight simulator, the only one available at a private college in the region. The 30-year-old Aviation program, one of the largest undergraduate degree programs at JU with 160 current students and more than 550 graduates, is near the top of U.S. collegiate aviation programs.

“It’s important that you’re going to a school like this. It will pay off,” Scott told students at the luncheon. “That said, you’re going to have to learn cross-disciplines. Learn other fields, and learn the cultures of other countries. China is doing very well right now in space exploration.”

Asked about a manned mission to Mars, Scott said he felt it was “generations” away because of the length of time – nearly three years – required to travel to and from the red planet.

“Right now, without the kind of competition we had internationally in the past, we are at a standstill in the U.S.,” he said. “To recover what NASA had is going to take 10 to 20 years. With future cooperation, we can focus on advances and on getting back to the moon. There is a lot to do there.”

Students in attendance were star-struck, to say the least.

“This is so cool. It’s amazing,” said Michael Korona, 20, an Aviation junior. “Want an astronaut to talk to you? Jacksonville University makes it happen.”