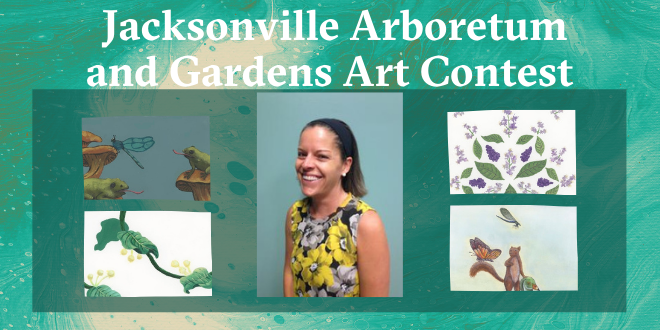 Art and nature collide to create ‘Instagrammable’ spots in Jax

In 2012, Dr. Melinda Simmons stood among smiling strangers posing in front of colorful murals of wildlife at the San Francisco Zoo for the quintessential vacation photo-op. It’s a similar scene that plays out in places like Nashville, Los Angeles, and New York, where public art creates “instagrammable” moments for travelers.

There, as groups of families and friends captured these precious memories with their loved ones, Dr. Simmons was inspired to take this photo-op experience back to Jacksonville, Florida, and recreate it at the Jacksonville Arboretum and Gardens.

Dr. Simmons is an assistant professor in the Marine Science and Biology Department at JU. She has served on the board of the Jacksonville Arboretum and Gardens going on seven years now.

“At the front trailhead, we have these signs with maps and information on the arboretum. They look really nice from the parking lot side, but the backsides are just blank space.” Simmons said.

Simmons saw an opportunity — one made possible by the unique culture and atmosphere found at Jacksonville University.

At JU, small class sizes are selling points because they allow for one-on-one interaction between professors and students. They also allow for more interdepartmental collaborations.

For this project, Simmons collaborated with Assistant Illustration professor Nicholas McNally to get the job done. McNally rallied his students, and had them treat the collaboration as a real-world project, where they were to act as if they were being commissioned by a real client to submit artwork.

“When she first approached me with the project I was very excited because I did it with a previous class, and something I try to do with all of my classes is to have it very practical and as much as it would be like to be a real life illustrator.” McNally said.

From there, McNally and his students set off to complete a project that would bring another area of Jacksonville to life. The art community here is blossoming with murals across buildings in the greater Arlington, Riverside, Murray Hill and Jacksonville Beach areas.

Seven students from the art department submitted their work for the contest. Among them, Ian Freese ’21, who chose JU because of the class sizes, says he greatly benefited from being involved in the project, calling the experience “intimate.”

“After I finished the final piece and received some wonderful praise during the graded critique, I was very happy to think that this piece might be enlarged and positioned at such a great location [the Arboretum], where so many people could see it and admire it. I put forth immense effort to create an incredible piece that I was proud to submit.” Freese said.

The contest is still ongoing, as the Arboretum is still accepting votes on which pieces to feature on the backs of their signs. To find out more about the contest, visit https://www.jacksonvillearboretum.org/2020-art-contest-ju/