Home » Admin » From the Magazine » Anjali, Myrtle & Mary: A Daughter’s Passion for the Ocean 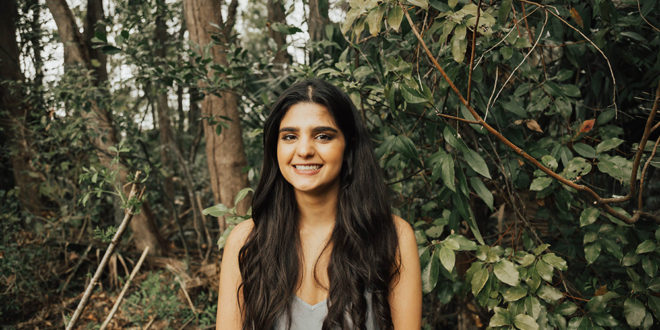 Anjali, Myrtle & Mary: A Daughter’s Passion for the Ocean

It all started with Myrtle the Turtle.

Watching the 500-pound green sea turtle swim around her tank is Anjali Bhardwaj’s earliest memory of her family’s frequent visits to the New England Aquarium in Boston.

That was when Anjali started to fall in love with the ocean.

And when she graduates from Jacksonville University this spring with a bachelor’s degree in marine science, she plans to make it her life’s work.

Completing her education, however, has been a challenge for the 22-year-old because as much as she loves her studies at JU, Anjali has wanted most to be at home in Reading, Mass., with her family.

The summer after Anjali’s freshman year in college, her mother, Mary, 61, was diagnosed with glioblastoma, an aggressive form of brain cancer.

Anjali took off that fall semester so she could help while her mother underwent treatment, including driving to Massachusetts General Hospital in Boston for radiation treatments every day for six weeks.

Anjali seriously considered transferring to a school closer to home, but her mother would have none of it. After all, her mother was the one who had discovered JU’s Marine Science Research Institute and knew it was the perfect fit for Anjali.

At Mary’s insistence, Anjali came back to Jacksonville and back to the degree program she loves. But she spends every summer at home taking care of her mom.

It’s a close relationship. Mother and daughter chat every day by phone.

“We really like ‘Grey’s Anatomy.’ We watch it together and talk during the commercials,” Anjali said. “I even call her between classes. I harass her every chance I get.”

A senior this year, Anjali was determined to graduate on time, despite the setbacks of her mother’s devastating illness and missing an entire semester. But earning a science degree in only seven semesters has been especially difficult, particularly since much of her coursework includes lab requirements. She has been completing four labs a semester, a grueling schedule, all while working as a teaching assistant and receptionist in the Honors Undergraduate Research Office.

“She has quite an artistic streak. We decorate the lounge for holidays and parties—she makes a lot of the decorations,” Haavisto said.

“You would expect with what she’s going through that she would be grumpy, or snappy, but she always has a smile and never complains,” Haavisto said. “Very few people know anything about it.”

Anjali’s supervisor, Linda Christoffersen, honors coordinator, has been equally supportive, asking how Anjali and her mom are doing. “She’s a beautiful girl, inside and out,” Christoffersen said.

And Dr. Quinton White, executive director of the Marine Science Research Institute, was always a phone call away.

“Dr. White would call to make sure I was OK,” Anjali said. “And this year when he was coordinating class schedules, he made sure none of my classes overlapped so I could get all my labs in.”

In addition to a rigorous schedule and her part-time job, she has served as a teaching assistant to a freshman oceanography class.

“They get to go out on the boat and do beach surveys. It’s lots of fun,” Anjali said. The ‘boat’ she referenced is The Larkin, JU’s state-of-the-art floating classroom. “I remember doing it when I was a freshman and realize how much I’ve learned since then.”

At the Jacksonville Zoo and Gardens she worked with stingrays, helping train the skittish creatures and assist with various medical procedures, including ultra sounds.

At the New England Aquarium, she worked with seals and sea lions, and became especially fond of northern fur seals, a protected species found in Alaska and Russia.

“I would love to do population surveys of them,” she said. “As a result of overfishing they have to dive deeper to find food. Because the parents are out hunting longer, the seal pups get stranded.”

Anjali plans to work for a few years after graduation — at the aquarium or possibly the Woods Hole Oceanographic Institution on Cape Cod — and then attend graduate school.

She wants to raise awareness about the importance of protecting the ocean and understanding how humans affect it.

“I don’t think people realize how everyday decisions impact the ocean,” she said. “Something as simple as using straws and plastic bags, which can end up in the ocean, has a tremendous impact. If you make one small decision, like using reusable bags, you’re helping the ocean so much. It’s such an easy thing to do.”

She also wants to stay active in the National Brain Tumor Society, an organization where she and her family have found a lot of support.

In the spring of 2015, she was part of a delegation that lobbied members of Congress for that funding. Last summer, she witnessed the signing of a proclamation declaring the month of May Brain Tumor Awareness Month in Massachusetts.

The life expectancy for a patient with glioblastoma is 14 months, Anjali said. But her mother is still making those daily calls to Anjali more than two years after her diagnosis.

“She is really strong and is always so positive, but she can’t handle everything,” Anjali said.

“She has dealt with seizures, strokes, a brain hemorrhage, memory loss and losing the ability to walk, but has always been more concerned with everyone else being OK,” Anjali said. “Because of this—all of this—having her at my graduation has been the ultimate goal.

Anjali said she would love to take her mother to the beach while the family is in Jacksonville for Commencement, so they could enjoy the ocean side-by-side, perhaps for the last time, a tie that will always bind them.