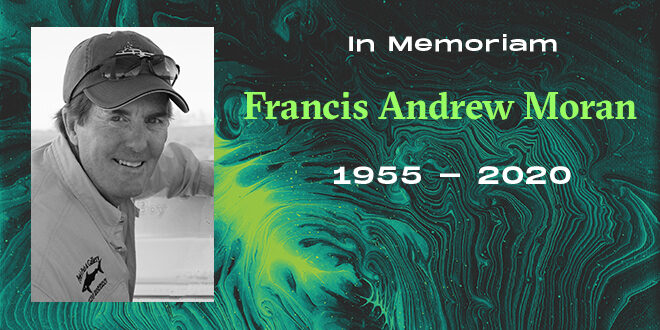 Andy Moran: A Friend for Life

When the story of a life is told, patterns frequently emerge, a portrait of what meant so much to the person who passed. How did they spend their time? What did they accomplish on their journey? Where did they go to be happy? For Francis Andrew “Andy” Moran, the answers to these questions would have surely included Jacksonville University. To say Moran was a friend to this institution is an understatement. He was that and so much more.

Moran passed away recently at the age of 65, but his numerous contributions to JU will endure for generations. A graduate of the class of 1978, his relationship with the University spans four decades. While a student, he majored in business, was a proud member of Phi Delta Theta and was active on the Interfraternity Council.

As an alumnus, Moran served on the University’s board of trustees from 2006 to 2015. He also held a seat on the board of governors, and along with his wife, Margot, reached out to prospective students through their work as JU ambassadors. In 2014, in honor of JU’s 80th charter anniversary, Moran was selected for the 80 Alumni You Ought to Know list. In 2016, Moran was honored as a Jacksonville University Alumni of Distinction winner, an award given to graduates demonstrating significant professional accomplishments, community and philanthropic efforts, and continued support of the University. It was an honor well-deserved by a man whose influence was recognized off-campus as well.

As a leader in his professional field, Moran was president and chief executive officer of FAM Holdings Inc., a diversified private holding company with interests in financial services, commercial real estate and private equity investments. He was a founding member of The Newport Group, a leading provider of retirement plans, corporate insurance and consulting services; and a board member for SkyeTec Inc., a Jacksonville-based environmental services company.

As generous JU supporters, Moran and his wife contributed their time and donations to numerous university programs and initiatives. They also contributed to JU in one very personal way as parents. Of their three daughters – Audrey, Leah and Madeleine “Maddie” – two would continue Moran’s legacy as Dolphins themselves. Maddie attended JU from 2009 to 2011. Audrey graduated in 2010 and currently serves on the board of trustees, just like her father did. In addition, Moran’s sister, Phoebe Manders, graduated from the University in 1980.

By all indications, Moran’s commitment to Jacksonville University was a family affair, and it is clear that the school held a special place in his heart. For that, his Dolphin family will forever be grateful to this man who gave so much as a student, an active alumnus, a legacy parent and a faithful friend whose special place was right here on campus.