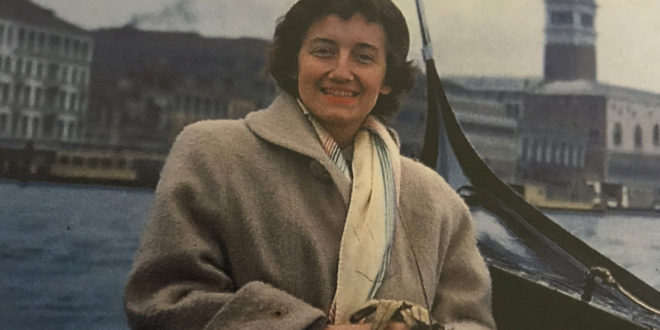 After all, in her century on the planet, she’s forged ahead boldly on numerous improbable-yet-successful projects, presided over a growing university and blazed new trails for women.

Her husband saw it, though.

There she sat sobbing next to him in 1955, wondering why her German classmates kept shouting “Ami (American) … go home!” when she showed up to her first class for her doctorate at Frankfurt’s leading university.

Her husband, Army Col. Harry L. Kinne, held her hand as the tears flowed, and told her that many of the city’s residents had lost family and friends during the U.S. military’s relentless bombings in World War II that destroyed most of their neighborhoods.

And, he added, the dazzling sapphire-blue Buick convertible sports car she drove and the fun-loving brightly colored clothes she wore probably didn’t help things, either.

These people have been deprived. They have little, and many are still angry, he said. You have to understand.

“Harry was 15 years older and much smarter than me,” said Fran, Past President and Chancellor Emerita of Jacksonville University. “I went back with a whole new attitude. I parked two or three blocks away. I wore the same drab, khaki things like they did. It opened my eyes.”

Back she went, and excelled in class. It was a turning point.

Fran Kinne’s dogged pursuit of her Ph.D. had begun in 1948, when she arrived in Hankow, China, as a newly minted Army wife accompanying her husband on his new post-war assignment as a senior officer.

At the time, she was, for lack of a better term, an “American Occupation Wife.” As detailed in volumes such as When the War Was Over: Women, War, and Peace in Europe, 1940-1956 and Unofficial Ambassadors: American Military Families Overseas and the Cold War, she could easily have sat back with the “privileged” few while in China, Japan and Germany, pouring the tea, pitying the masses and swooning over symbolic helpful acts of handing out diapers or baking cookies.

Had she fallen victim to noblesse oblige – in this case a type of American aristocracy as the victors tending to their vanquished enemies – she could have become neatly separated from the decimated citizens around her, as too many of the U.S. visitors are reported to have.

Instead, she assimilated. With an optimistic persistence those at JU would later come to know so well before, during and after her time as president, she engaged as much as she could, with an unwavering desire to grasp who she was among and how to connect with them.

Even now, her still-bright eyes tear up when she thinks back to the nurturing guidance of her English father, Charles Bartlett, a scholar and newspaper owner, and especially of her Scandinavian mother, Bertha Bartlett, a librarian, operatic singer and intrepid trailblazer who wore high heels up until she died at age 100. Both instilled in her one of the guiding principles of her life:

“Life isn’t about me. I’m there to help people. If you can’t get to them, you can’t help them. It’s what keeps me going even today.”

In China, she had dreamed of beginning the scholarly work that would help her decide upon her dissertation topic for her Ph.D., to add to her bachelor’s and master’s degrees in music education from Iowa’s Drake University.

That dream died quickly. She was told she could not lecture or attend classes at the university across the river because it was too dangerous to go anywhere without a male accompanying her.

She resigned herself to keep soaking up what she could of the culture and music around her, patiently waiting as her life experiences planted the seeds for whatever would become her future dissertation topic.

There, living in a second-floor downtown apartment furnished with an old mattress, two chairs and a card table, walking about as people stared at her and her vivid wardrobe, lacking in basic necessities and under threat of poisoned food by the locals, she became anemic due to poor nutrition.

It was a wake-up call – soon surpassed by the chaos and confusion several months later as Americans were evacuated when the city became surrounded by Chinese Communists.

“Contrary to popular belief, although I’m a positive thinker, I have been known to be angry, although I would call it frustrated. But it’s the way I choose to handle it. It’s confronting a displeasure with things that I think can be different. In this case, I decided, no matter where I’m going, whether it’s the middle of China or somewhere else, I’m going to do this (dissertation).”

From Hankow the couple wound up in Shanghai, China’s industrial hub, and then journeyed to Tokyo, where Harry was assigned to Intelligence in Gen. Douglas MacArthur’s headquarters.

By 1949 she’d begun volunteering as a teacher of English and Music at Tsuda College and Daihachi girls’ school. She settled on a topic for her dissertation as she became fascinated with the influence of America on the occupied country: “The Place of Western Music in the Stabilization of Japan.”

The stark contrast between Japan’s rigid paternalistic culture and her home country’s high regard for individual expression and freedom began to come into focus. She could no longer take for granted the greater equality women in U.S. society were gaining, and she made it a side goal to influence the girls in her classes and the few women in the Japanese Legislature about the importance of liberty, democracy and individual rights.

“The whole time during those years I tried to complete my doctorate, I was continuing to develop my strong desire to help bring people together,” she said. “All the time I was doing it, I was dealing with people who never had known Americans. So, at the same time that I had to do things how I was raised to know as the right way, I also had to realize I could always learn from others. And I did. And had fun doing it.”

She eked out progress, fitting in her doctoral work between her obligations as a military wife, her volunteer teaching and her work in helping re-establish schools in war-ravaged Japan, but again plans changed when in the summer of 1950 two shockwaves hit: her father died unexpectedly, and the Korean War started.

Barely making it back to the Midwest to be at his side just before he died, and then finagling her way onto a troop ship as a musical entertainer to journey back to Tokyo as the Korean War erupted, Fran had to gather herself and recommit to her studies.

However, Harry was again reassigned, this time to Fort Bragg in North Carolina. Three more years passed and Fran was unable to continue on her dissertation because of other commitments. She again bided her time, until 1955, when her husband got orders for Frankfurt, Germany, as Commanding Officer of the 4th Armor Group, and later the Frankfurt Sub Area, during the American Occupation.

That is when everything her parents had taught her growing up in “small but lively” Story City, Iowa, and all she had experienced in her 38 years blended together with the right educational opportunities and empathetic professors to allow her to finish her dissertation, after a third try.

By then, no longer experiencing Japan firsthand, she’d changed the topic of her discourse to “A comparative study of British traditional ballads and American indigenous ballads.”

It is also where she was scorned most, shoved out of line every day as she tried to register for classes, even spat at, for having the audacity to try to become the first American woman to complete a dissertation in Germany since the outbreak of World War II.

The “Occupation Americans,” as they were known, remained more segregated in the bigger urban areas of Germany than in the rural areas, and less contact occurred between them and German citizens, fueling suspicion and contempt. American military wives in particular were viewed by many as moneyed, insensitive and immodest.

Some professors wouldn’t even allow Fran in their classes. A few, however, including the great 20th-Century philosopher Dr. Max Horkheimer, reached out to guide her in literature, music and philosophy.

“They saw. They could see that I was a separate thing, I’m just not my husband, I’m an American who wants to study,” she said.

On July 23, 1957, at age 40, after nearly three years’ additional work to publish her dissertation, Fran successfully completed a grueling three-day oral defense, ordered to do so in a black dress with ruffles up to her neck “so as not to distract,” deftly handling all questions in German as she sat before her professors adorned in robes and wigs.

She was hailed in the local and U.S. press, including The New York Times, for her accomplishment. “The Frau Doktor Brings Us All Together in Peace,” one German paper proclaimed.

What drove Fran Kinne, a decidedly non-traditional student crisscrossing the globe at a time when women were still years from getting their due in academia, to finish her Ph.D. on the significance of balladry in American history is a testament to the force of nature that she is.

It may have begun with a passion for music and culture sparked by the melodies coming from the family piano she heard and then played as a child prodigy. Or it could have been kindled by tales of the pioneers of the West her mother told her at bedtime. And continued with the Norwegian ballads her grandmother sang to her as a youngster. Then nurtured by an abiding love of people – of all cultures, incomes, races and religions – and in the sharing that ultimately can bring them together.

“Why did I keep on going? Because I know I can always do something better than I’m doing it now,” she said. “My parents taught me life is so rich that we can’t even begin to scratch the surface, and the exciting thing is to keep learning. There isn’t a day that goes by that I don’ think, even now, ‘I never knew that.’”

Perhaps near the end of her 70,000-word Ph.D. treatise accepted by the Philosophy Faculty of the Johann-Wolfgang Goethe University Frankfurt/Main lies hidden the central finding she had gleaned from those early adult years of toil, study and experience, as she sat writing, reflecting on an already astonishingly full life, evaluating her current place in it, and peering so buoyantly toward a future that would bring such remarkable success.

It’s there that the author, by design or not, beckons the reader in lines imbued with the prairie country ideals that arguably spawned the essential moral of her life: That we are all in this to give and serve together, no matter our station or standing, and the joy of that recognition releases us to achieve whatever it is we seek to accomplish: 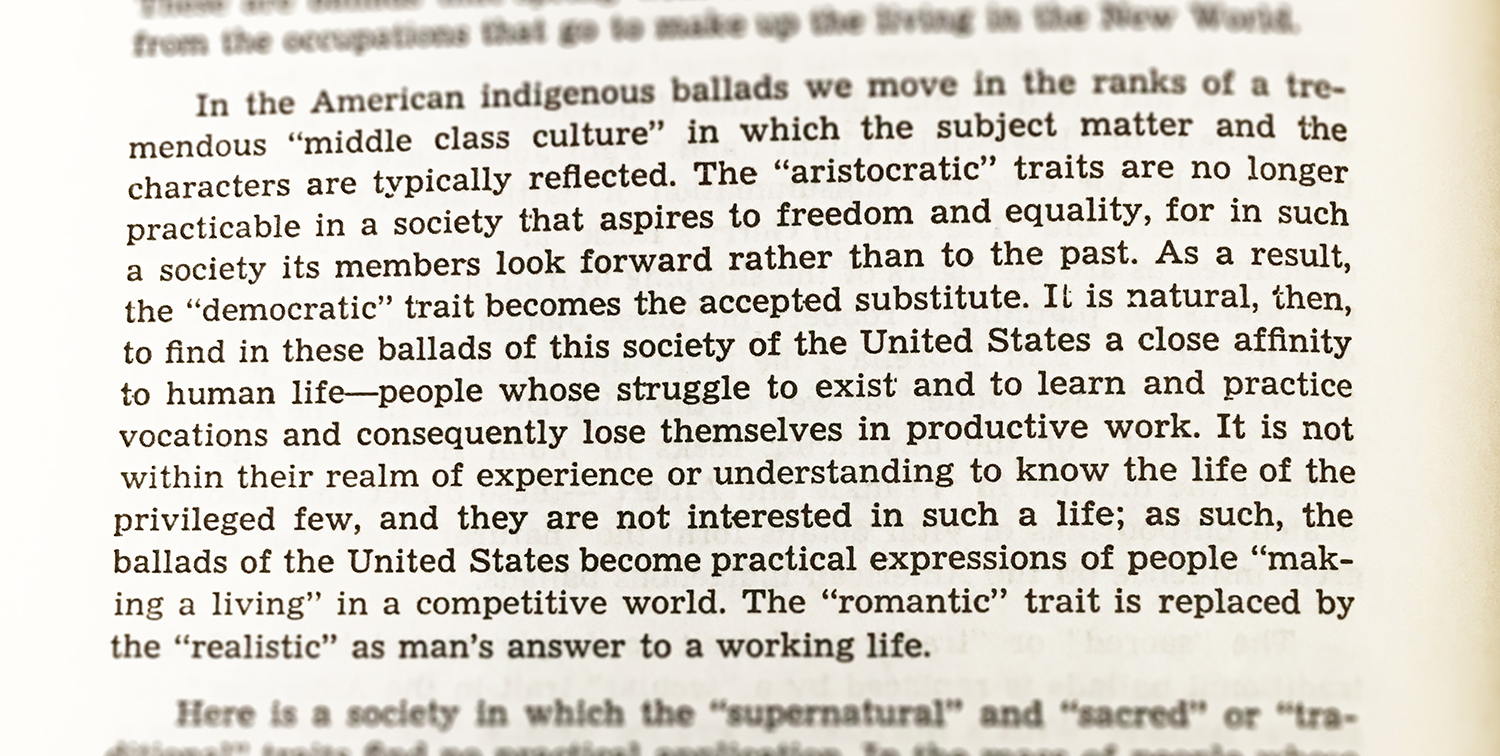