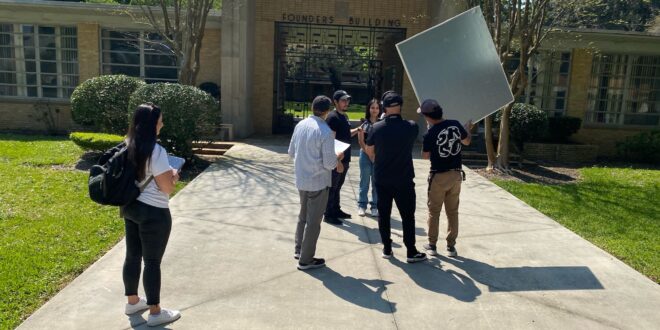 All this week, The College Tour, a TV series streaming on Amazon Prime highlighting universities across the U.S., is filming at Jacksonville University for the final episode of its 5th season.

Created by Emmy-nominated and multi-award-winning producers, The College Tour gives prospective college students a look inside universities from around the world through the eyes of current college students. Each episode features a single college or university and explores the distinct campus culture, programs, facilities and, most importantly, people who make the university unique.

The show is hosted by Alex Boylan ’99, winner of The Amazing Race. Boylan is the host and producer of multiple award-winning shows, including The Chef’s Table, Animal Attractions, CBS Buzz Tour, The Steve Harvey Show and many more. He had the idea to create the show after taking his niece on a college tour in Los Angeles, Calif. two years ago.

“I’m so excited to be back on campus at my alma mater and to show the world how special JU is,” said Boylan. “Many things have changed since I was enrolled at JU, but what hasn’t changed is the unique culture here on campus. We’ve already met so many fantastic students and faculty who embody that JU spirit, and I’m so proud to share their stories with the world!”

Throughout the next eight days, Boylan and The College Tour crew will film 20 segments with students, faculty, alumni and senior leaders for a 60-minute episode highlighting Jacksonville University. Future Dolphins will get an idea of what it’s like to be a student at JU, and out-of-state families will see what Jacksonville has to offer, from its thriving downtown to its white sandy beaches.

The episode is expected to air in early August of this year.