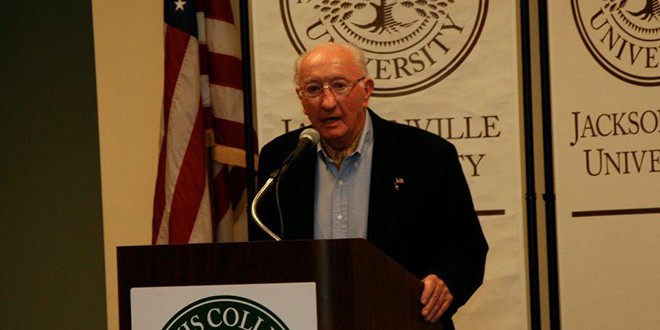 The Davis Aviation Center is mourning the loss of the innovator and founder of the aeronautics program at Jacksonville University. Retired Lieutenant Colonel Curtis Truver passed away Nov. 8, 2014 at the age of 85.

A retired Air Force lieutenant colonel, Truver served in Korea and Vietnam during his 25 years of services. Lt. Col. Truver attended Penn State University prior to serving. He founded the aeronautics program at Jacksonville University in 1983, after receiving his Master of Business Administration from George Washington University in Washington, D.C., and serving as department chair in the College of Aeronautics at Florida Institution of Technology in Melbourne.

“He said he had an idea, and it was a wonderful one,” Kinne told The Florida Times-Union. “We were starting a lot of new programs, and I worked on it for about six months.”

Following the inception of the program, Lt. Col. Truver grew it from 19 to almost 100 students over 11 years. In addition, he wrote a textbook, “Aviation History and Development,” published by JU in 1984, and revised in 1993.

His wife, Elisabeth Truver, recalled his love of flying and how he translated that into the aeronautics curriculum. He led the initial agreements for flight training with various flight schools operating out of Craig Municipal Airport. To this day, Jacksonville University aeronautics students continue to take instruction at Craig.

“Curtis Truver has left a lasting legacy at Jacksonville University. From the seed he planted 31 years ago, the Aeronautics Program he founded has grown into a strong, vibrant part of both the Davis College of Business and the University as a whole,” said Capt. Matt Tuohy, Director of Aeronautics. “He was the consummate aviator, educator and patriot. While he will be missed, his influence on the program will be felt for years to come. “

To view a full obituary in The Florida Times-Union, please click here.