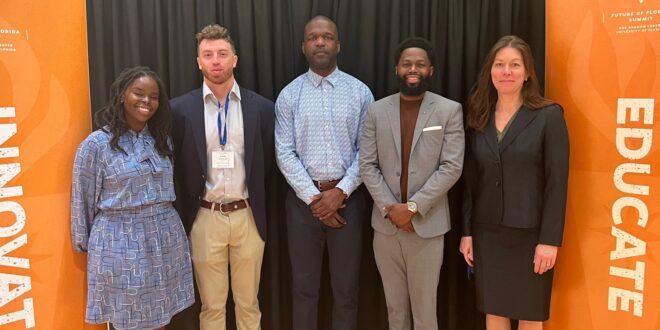 Florida’s different, we all know that.

In fact, that might be our only consensus. Being America’s perennial swing-state means that we’re rooted in political discourse. We’re an involved people, with many perceptions about current issues, and how to solve them. Sometimes this causes Florida’s future to seem up in the air—where do we start?

The Future of Florida Summit convenes over 100 of Florida’s brightest and most politically engaged students, puts this question to a major public policy issue, and empowers them to decide. Jacksonville University’s Master in Public Policy (MPP) students have attended the last six years.

The summit is hosted annually by the Bob Graham Center for Public Service at the University of Florida. The UF Center has a Memorandum of Understanding (MOU) with the Jacksonville University Public Policy Institute, which formalizes a strong partnership and collaboration. As part of that collaboration, MPP students, economist and public policy professor Dr. J. Rody Borg, and Institute Director Rick Mullaney attend the Summit each year. “Senator Graham, one of the state’s greatest public servants, initiated the MOU and we greatly appreciate the collaboration we have with the University of Florida Graham Center.”

Mr. Mullaney kicked off the conference with a discussion on the fundamentals of public policy: why it matters and how to design it. He was among several speakers who discussed a range of issues affecting the Florida economy such as mass transit; business and economic forecasting; healthcare needs and disabilities; agricultural demand; farm labor and rural well-being; wage theft claims; equity and inclusion; and econometrics.

MPP student Renaldo Horn was particularly impacted, “There are so many areas that I’m interested in, and it seems like there was an accessible expert for each of them. Whether it was Dr. Dedenbach who specializes in Urban and Regional planning or Lupe Gonzalo who was a migrant worker for 12 years and now works with the Coalition of Immokalee Workers to stop wage theft and other abuses in her community, it was a pleasure to get to listen and interact with them all.”

Perhaps the most exciting part of the summit is that students draft policy proposals to address the issues that they learn about at the conference. Public policy students Caleb Carswell, Renaldo Horn, Amy Ring, and Stephanie Sparman were in attendance and unpacked economic equality, the COVID-19 social safety net, immigration, and college debt amongst their colleagues. Dr. Borg was especially impressed with the discourse, “The policy proposals created by the students were very imaginative, thoughtful, and detailed.  I think that several would be worth adopting on a statewide level.”

Students at the conference develop their policy proposals to address these topics, present their proposals to their peers and a panel of professionals, and are judged. “The Summit is about preparing future leaders and making thoughtful policy proposals to improve Florida’s future. We are very pleased to attend and participate each year,” says Mr. Mullaney.

The top three proposals receive an award. But these awards aren’t just shiny wall decorations. Student proposals are heard by political leaders, taken to committees, and integrated into the current policy (and have even been known to inspire new policies). Horn says, “The variety of project proposals was exciting. They opened my mind to areas that I don’t typically think about. It was a great experience!”