Home » All Sections » A World Away and Never Closer: The Knox-Stewart World Cup Reunion 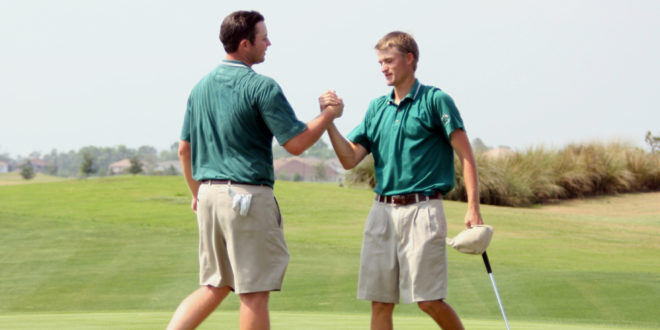 A World Away and Never Closer: The Knox-Stewart World Cup Reunion

May 5, 2007. The lawns are green, the temperature in the mid-80s and the Florida sun is shining. Back home it would have been raining, or at least cloudy, and about 30 degrees cooler. But Russell Knox and Duncan Stewart were not in the Highlands near the popular Loch Ness. They were on the Science Green of Jacksonville University, graduating with Bachelors of Business Administration and majors in Management.

Knox and Stewart first met while playing in junior golf tournaments throughout northern Scotland, and the duo has finally reunited.

Knox was the first to commit to JU. Using a recruiting agency called First Point UK, the Knox family was presented with a list of schools that might be interested in having Russell join their golf teams. “Dad and I flew over to Jacksonville. It was the first school we visited,” said Russell. And it seems JU was the perfect fit.

Duncan followed suit, rounding out legendary Coach Mike Flemming’s roster, and the two Scots resumed their adventure, side by side. College roommates. Teammates. Both with families a world away. They even worked at the same country club during those college years. And in 2006, Russell and Duncan shared the Atlantic Sun Conference individual title, remarkably shooting the same score each day (70-68-68).

“I’ve got an amazing family at home and everything happens for a reason,” Duncan once said. “Now everything’s turned on its head. I went from possibly not playing again… to things looking very good. It’s quite bizarre, really. I can’t wait to get there and do Scotland proud.”

“There” just happens to be Kingston Heath in Melbourne, Australia—home of the World Cup of Golf, which runs from this Wednesday, Nov. 23, through Sunday, Nov. 27.

“It’ll be good to get back together as a team – it’s been nine years since we teamed up together at Jacksonville University,” said Duncan. In fact, the last time they played together was the 2007 NCAA Regionals. Former teammate, Kipp Henritzy, recalled the day he first arrived on JU’s campus and was faced with meeting his teammates. “Duncan worked in a slaughterhouse in Scotland and had cut his face by accident. He looked like he lost a knife fight. Then you had Russell, this skinny kid with long hair. We all looked like a bunch of rejects,” said Kipp.

From those early days—a time Russell dubs “close to the best four years of my life” and says he wouldn’t change that experience for anything in the world—grew an unquenchable camaraderie and ease of working together that led to Russell’s somewhat controversial decision to select Duncan and together represent Scotland in the World Cup.

Russell has repeatedly told reporters, “I feel like he could easily be in my shoes and vice versa, and if he was in my shoes, he would’ve picked me.”

As Scotland’s highest-ranked player, Russell sits at 18th in the world and had the privilege of choosing his playing partner. When Russell texted Duncan, at the conclusion of a second PGA Tour title, he extended the invitation to join him in Melbourne. Duncan thought he was joking. “The last thing he said was, ‘Let’s go win this,’” Duncan says.

And Duncan was not the only one surprised. The world of golf was watching. In its more than 60-year history, only 15 nations have been the proud possessors of the John Jay Hopkins Cup, and Scotland’s solitary success came when Colin Montgomerie and Marc Warren claimed the title in 2007. Several Scots were firmly ahead of Duncan in World Rankings, but Russell insists that as far as he was concerned, it was a simple decision.

“If we finish dead last by 20 shots or win the thing, we’re going to talk about this until we’re dead,” Russell said.

Now the two would face a caliber of competition the likes of other past Cup winners–all legends in their own right –Ben Hogan, Sam Snead, Jack Nicklaus, Arnold Palmer, Tiger Woods and David Duval, and that’s just the American players who achieved the iconic international win.

“I wouldn’t say I feel like I’ve figured the game out now, because I don’t believe anyone ever truly does that,” Russell says. But one thing he says he did learn over the past few years: “You need to be single-minded, take the attitude that it’s you versus the course and not worry about what anybody else is doing. It took me a while to figure that out.”

Some say golf is a numbers game. For JU alumni and fans, the numbers involved in next week’s World Cup of Golf have never been be more significant. 72 holes. 28 teams. 5 days. 2 JU alumni.

“I’m proud to be a JU graduate, and hopefully I’m not done with success,” Russell said just last week. “It’s weird how you end up where you do, but it’s like it was meant to be.”

Jacksonville University wishes Duncan and Russell the very best at the World Cup and beyond.