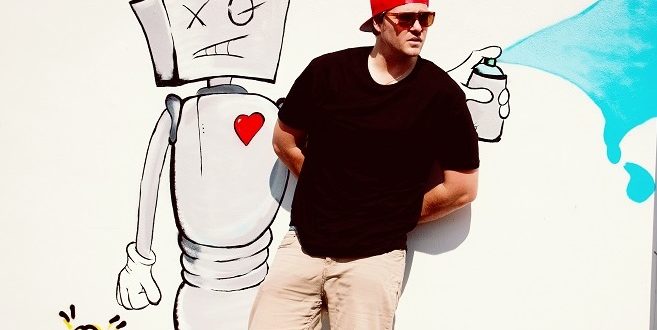 The mural will encompass an interior wall of Founders, just beyond the wrought iron gate, and will feature motifs particular to Sweeney—whimsical robots, oversized hearts, repeating lines of text, and bold splashes of color. 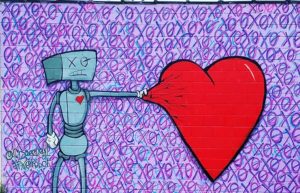 An educator, motivator, and contemporary street artist, he grew up in Ocean County, New Jersey. “When I started looking at colleges, I knew that I wanted to move south. I needed to be near the beach.” In the beginning, Sweeney says that he considered only art schools, but happened to stop by JU. “I loved the campus. JU has a great art program, but isn’t just an arts-focused school. So, I had more options.”

Sweeney and his brother Patrick both became JU Dolphins. He says, “We owe a lot to this school. We’ve made lifelong friends, great connections, and learned so much, inside and outside the classroom.”

He loved JU’s family environment, too. Professor of Education Dr. Colleen Wilson, Sweeney says, offered encouragement and support along his college journey, and is now part of the team reconnecting with him about the mural.

“She mentored and looked out for me, and well after I graduated, she attended my first art show. That was about two years ago. Not many other people showed up, but she did. This is a perfect example of how amazing teachers can be and the difference they can make. That’s what I want for my students.”

A sociology major and member of Sigma Nu, Sweeney graduated from JU in 2013, then spent six years living in Jacksonville. His first job after graduation was teaching art at Jean Ribault Middle School. “I moved away only because I wanted an elementary school position and those don’t come along too often.”

And right now, K-5 art education is his sweet spot.

Each year, Sweeney challenges students to create their own comic strip or short story. He explains character design and originality. “We start with shapes,” he says. “One day I asked the class to tell me what shape should be used for making the head of my character, and they said  a square. I went with it and thought, let’s make him a robot.”

It was his second year of teaching. That robot would become one of Sweeney’s most iconic designs—a heart on his chest like Dorothy’s tin man, gloves like Mickey Mouse, and Xø’s for eyes, like hugs and kisses. “Because he runs on love.”

The original sketch made in the classroom that day differs widely from how Xø appears today, but Sweeney says the class absolutely loved it. He made copies of the drawing and gave coloring sheets to his students. “Within a day, all the Xø robot coloring sheets were gone and the students kept wanting more.” This motivated elaborations on the character, depicting him dancing or playing. When students began redrawing Xø for Sweeney to hang on classroom walls, he knew that he had something real and of great value.

“Any teacher can agree that the most important thing in the classroom is getting your class engaged, keeping their attention. So, that’s the concept used in my art.”

Later, his signature stretched heart motif followed, again in a drawing with Xø. Though he says the original heart designs were not born of any preconceived agenda, Sweeney has since put a lot of thought into how the image might impact others.

“People sometimes go through things and hearts get stretched, bent, pulled, and even wrapped around all sorts of obstacles. In the end, at least in my opinion, the heart remains whole. I want to spotlight strength of heart and show that hearts can be stretched and shared.”

Parents regularly stop by to express how their children love coming to class. Families visit his murals. Jacksonville, Naples, Gainesville, Vero Beach, Sebastian, and Fort Pierce are all home to one or more of Sweeney’s large scale works. Currently, the largest spans more than 25 feet and is located in Murray Hill at 813 Edgewood Avenue South.

Back in March of this year, the Murray Hill mural was vandalized, along with several other public art locations. Though annoyed and frustrated, Sweeney says that it comes with the territory in street art. He returned to Jacksonville soon after to repair the damage. “It’s not the first to get tagged, and sadly, it won’t be the last. But now it’s brighter, better, cleaner… and we’ve showed that the vandals didn’t win. Love and art did.”

Because of scale, his paintings can take up to four days to complete. His primary medium, spray paint, is quick drying, easily mobile, and a must for working large. The Founders mural, he says, should take no more than two days. “I was equal parts excited and surprised when I was told that the mural would be located there. I took many classes in that building and I’m excited to become a permanent part of its history.” 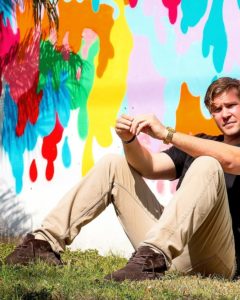 Catch him in action on JU Facebook and Instagram. To view more of his work, visit @crsweeney1.

As a student, there were many artists he admired and enjoyed. From the pop art styles of Andy Warhol, Keith Haring, and Roy Lichtenstein to the urban edge of present-day graffiti writers, and they continue to inspire. “In all honesty, though, the biggest influence on my work are cartoons. I love cartooning and children’s books. The characters and designs are all so creative.”

Sweeney says he may pursue publishing a children’s coloring book with his own artistic spin. Most importantly, he has no designs on leaving the classroom.

“No matter what happens with me as an artist, I can’t imagine leaving my students. Teaching is fun. It makes me happy. Getting younger students excited about art just feels great. I still have personal goals, to travel the world painting and selling my work, but I’d also like to consider a master’s degree. I’m only 28 and really happy with where I am. Who knows? Maybe one day I’ll teach at JU.”