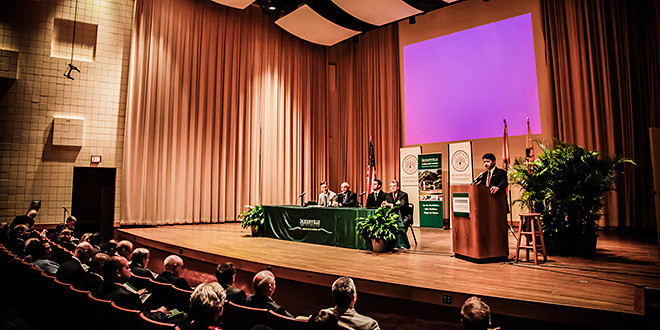 The Affordable Care Act and Medicaid expansion were under the microscope at the recent JU Public Policy Institute Healthcare Policy Conference, a forum that featured industry leaders discussing health care exchanges, spiraling costs, and how to cover 3.8 million uninsured in Florida.

The group presented varying viewpoints, pored over data, summarized studies and debated policy differences before an audience of more than 200. The conference was organized and moderated by JU PPI Director Rick Mullaney, whose goal for the event was to help “inform, educate and shape healthcare policy in Florida.”

JU alumnus Will Weatherford, Republican Speaker of the Florida House, who played a lead role in opposing the ACA’s Medicaid expansion in Florida, repeated media statements about his frustration with lack of coverage for Sunshine State residents and problems with Medicaid.

“I’m not proud that we have so many uninsured,” he said. “But … we can’t allow the ‘kinda’ poor to be able to pick their own insurance, but the ‘really’ poor to only be allowed Medicaid. That’s creating two Americas, and  that’s not fair.”

Steven T. Halverson, CEO of The Haskell Co., said health care in the U.S. was a “profoundly broken” system, consuming nearly 18 percent of U.S. GDP, with costs soaring, little accountability for outcomes, over regulated providers, physicians unprotected and no end in sight.

However, he said, leaving millions uninsured in Florida, who then use emergency rooms for essentially universal free care, creates a $1,000-per-family “hidden tax” when providers are uncompensated.

“This is an extraordinary program, and I’m proud of this Institute,” Halverson said of the conference. “We have the ideas and the imagination to solve this crisis … JU is as good a place as any to start the conversation.”