Home » All Sections » A Commitment to Serve: Catching Up with Veteran and Alum, J. Scott Drenning ’16 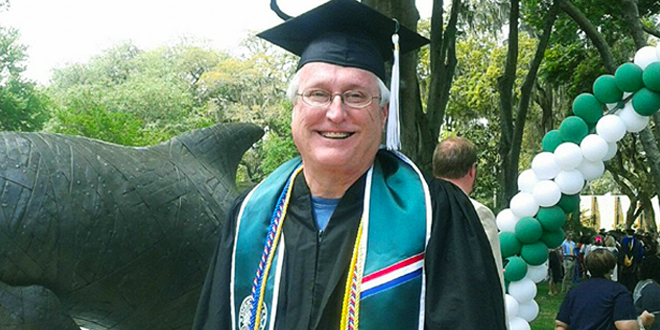 A Commitment to Serve: Catching Up with Veteran and Alum, J. Scott Drenning ’16

Earning a bachelor’s degree from Jacksonville University when others are planning their retirements, Command Master Chief J. Scott Drenning, Class of ’16, proves that it’s never too late to chase your dreams.

“I joined the military when I was 28 and served for 28 years, retiring at the highest enlisted pay grade. But I dropped out of college in my early twenties,” said Drenning. “So, I completed my bachelor’s degree just shy of 60 and landed my dream job in Key West, FL. It’s never too late in life to better yourself.”

At Home from Day One

Ending his accomplished Navy career in October 2012 as the senior enlisted advisor to the Commanding Officer, as well as the Director of the National Security Agency (NSA) in Fort Meade, MD, Drenning’s second act came shortly after in the spring of 2013.

“I joined the Jacksonville Suns security team and realized that many Suns staff members held Sport Business degrees. I was intrigued and considered starting a program,” Drenning recalled. “So, I dropped by the Veterans Affairs office at JU in early August 2013, and because of their outstanding efforts, I started classes that same semester.”

JU is proud to be one of the most military-friendly campuses in the country. It is consistently recognized as a “Best College” by both the Military Times and U.S. News & World Report. As a founding member of the Northeast Florida Military Veteran College Network, JU partners with other universities, military installations, veteran service offices, and other stakeholders, using their expertise to provide the best experience for military students and their families.

Drenning says he experienced JU’s commitment to veterans first hand. “President Cost, the faculty, and staff all treated me with the utmost respect,” he said. “They made me feel welcome from day one. If you’re a veteran considering attending Jacksonville University you will feel at home from day one.”

Drenning served as treasurer for the Veterans group on campus and was there when a grant funded the development of JU’s Veteran and Military Resource Center, which opened in 2014. During his time on campus, he watched the Center become a home away from home where fellow veterans and active military students could study, relax, ask questions, and connect with each other. Today many of Drenning’s military mementoes decorate the walls of the Center and he was honored during a JU Military Appreciation football game, where one of the players wore his command patch.

“Now the Center is led by Mike Mitchell, a former JU classmate of mine,” he beams. “He’s top notch and stands ready to assist veterans on campus from admission through graduation.”

Drenning’s experience at the Davis College of Business, JU’s globally recognized business school, helped prepare him for his dream job as Morale, Welfare, and Recreation Sports Coordinator for Naval Air Station Key West. Although the core business courses were challenging, they were later instrumental in helping him make a smooth transition into the workforce. He also credits professors like Todd Hall and Carol Dole who not only taught many of his classes, but were also outstanding career advisers. “When I think of my experience at JU, it really boils down to one thing,” he said, “that’s the quality of education at the Davis College of Business.”

Coupled with his JU education, Drenning’s commitment to volunteering throughout his military and post-military career — which included coaching soccer, baseball, and basketball for youth sports at the Navy’s Morale, Welfare, and Recreation Department — helped propel him to his current position at Naval Air Station Key West. He started the new post one year after Hurricane Irma left a path of destruction across the Florida Keys. Drenning focused his energy on rebuilding the storm-ravaged base and its surrounding community, as well as building morale.

“The Sports Program understandably took a back seat to more important priorities, though the program was in need of complete re-establishment,” he said. “The Sailors were ready for some well-deserved fun and competition.”

First came the hard work of clearing debris, replacing equipment, repairing and cleaning facilities, and restoring field lighting. With the basic restoration out of the way, Drenning established an evening activity schedule on base. Flag football, soccer, softball, dodgeball, volleyball, cornhole, bowling, pickleball, and basketball, including both tournaments and leagues, soon brought together the whole community. People quickly found out the sports program was up and running again.

Though Drenning and his family are enjoying all that Key West life has to offer, he doesn’t intend to stop learning and improving. He recently went back to school and this time, he’s studying marketing with an emphasis on social media.

Reflecting on his JU experience, Drenning is grateful for how it empowered him professionally and personally. “I didn’t just move to the Florida Keys for work,” he said. “I love the fishing, boating, and the local cuisine. So I plan to retire here. But I don’t think I’ll ever retire from learning.”