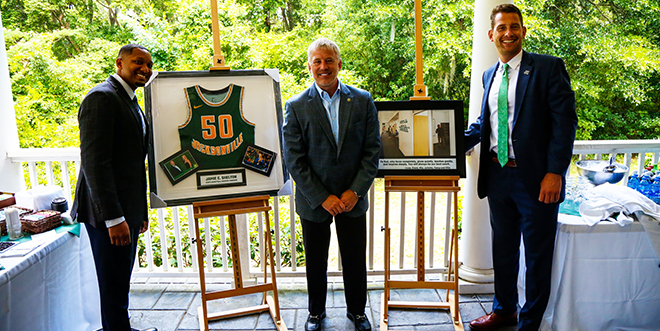 A Birthday Surprise for Chairman of the Board Jamie Shelton

Jamie Shelton had no idea what was in store for him on his birthday this year. Based on previous birthdays the Jacksonville University trustee and chairman of the board could have easily anticipated a few presents, perhaps a fun evening with his wife, Ali, and children: Grant, Mia, Juliette, Camp and Ellie. Little did he know when he left for work that morning that plans were afoot, secret plans entrusted to only a few who had somehow managed NOT to spill the beans. In fact, all the beans were completely intact as Shelton left for what was sure to be a busy day, complete with a board of trustees meeting at JU.

Behind the scenes, however, Ali Shelton had been orchestrating something big, something amazing, something that would make this seemingly normal birthday one to remember. “Jamie would much rather have a memory than an object, and our kids wanted to do something special for his birthday” she said. “Doing something at JU just seemed like the perfect fit as it would recognize Jamie’s dedication, but most importantly, it would benefit others.”

According to her, it all started with an idea, an impromptu lightbulb moment she had while running one day. Some would say it started earlier than that — years ago, in April of 2015, when Jamie Shelton was first appointed to the board as a trustee. Prior to then, he and Ali had no formal affiliation with JU. Ali Shelton had attended JU basketball games with her father in the ‘80s, and she and Jamie had known Jacksonville University President Tim Cost and his wife, Stephanie, through their involvement in the Jacksonville community, but they were not alumni, or faculty or staff. Nonetheless, in JU, they had found a home of sorts where they were welcomed and appreciated.

“Jamie and Ali Shelton are sharp, talented and passionate people who bring an infectious energy and enthusiasm to everything they touch,” said Jacksonville University President Tim Cost. “From Day One, they were all in — fully committed to what we’re doing here on our campus and constantly looking for opportunities to drive us forward in our mission. We are certainly grateful for their commitment and purpose — they are making this university better.”

Over the years, Jamie and Ali Shelton have become strong supporters of JU scholarship and athletic programs. Jacksonville University’s speech language pathology program is particularly close to their hearts.

“Jamie and Ali are well-known to our graduate students in speech-language pathology, supporting them as they achieve their goals to help young children and adults with speech and language disorders,” said JU Provost Dr. Christine Sapienza. “They understand the value of speech-language pathologists and once again are helping the Jacksonville community by supporting our healthcare programs.”

In addition, Jamie Shelton has always been particularly fond of basketball. He played in high school in Tennessee. His late father was the coach, and since he and Ali have become involved with JU, the basketball program has been a passion for him.

None of this was going through his mind as the board of trustees meeting concluded.  An outside reception was to follow. Jamie entered and — SURPRISE – that’s when he realized that everyone was there for him. There was cake and refreshments and birthday wishes all around, and in the middle of everyone on the covered patio, were two easels, both draped and concealed. Athletic director Alex Ricker-Gilbert and men’s basketball head coach Jordan Mincy did the honors, and that’s when Jamie’s real surprise was revealed.

“Jamie and Ali have been extraordinary supporters of our men’s basketball program since I’ve been here,” Ricker-Gilbert said. “One of my favorite things to do at home games is to look down to the floor seats after a big play, catch Jamie’s eye and look for his thumbs up or hand wave. Ali and Jamie care deeply about our young men and their experience, and a donation of this magnitude amplifies that. We are forever grateful to the (Korman) Shelton family.”

On one easel was a framed JU men’s basketball jersey, on the other a rendering of a hallway in the new basketball performance center – not just any hallway — but the Jamie C. Shelton Men’s Basketball Coaches Corridor.

Beneath the rendering were the names of Shelton’s children along with this quote: “To Dad, who loves completely, gives quietly, teaches gently and inspires deeply. You will always be our best coach.”

Somehow Ali had managed to keep this from him. From her initial idea, she had made a donation in his honor, arranged for this special dedication and celebrated him, his love for his family and for Jacksonville University all at the same time. Somehow, she and everyone involved had managed to keep it a surprise, and collectively, they had caught Shelton completely off-guard.

“I was absolutely floored … and a bit overcome with emotion,” he admitted. “I had no idea Ali was involved or had been working on this amazing birthday gift/tribute for weeks with Alex. When the rendering was unveiled showing the Jamie C. Shelton Coaches Corridor, and I read the words to me from our five kids, it was a very emotional moment for me; that from a person who rarely displays that type of emotion. Words just can’t do justice to the feelings I had at that moment.”