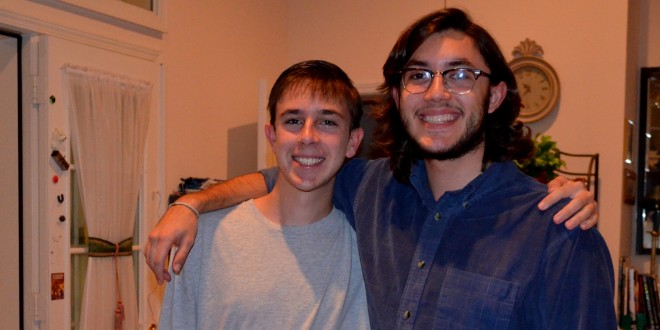 A Star Wars-themed add-on to the hugely popular open-ended video game Minecraft is drawing tens of thousands of curious players to the website of mechanical engineering junior Weston Miller and his cousin, Colby Newman, a freshman at The Bolles School.

The pair’s efforts have resulted in more than 98,000 downloads of “Parzi’s Star Wars Mod” so far, and YouTube gaming celebs have begun reviewing it, with one video gaining nearly 400,000 views and another praising it as “probably the best out of all the (Star Wars-themed) ones I’ve seen.”

Miller, 20, and Newman, 15, began the project last June and released their first version in December, just in time for the premiere of the Star Wars sequel “The Force Awakens.”

They bill the new world of Star Wars-themed adventures, characters, vehicles and environments as “a good example of a canon Star Wars experience in the Minecraft environment.” And one that took a lot of work. As in, more than a million lines of code.

“Colby did all the programming and I did all the models and textures and helped in planning the mod,” Miller said. “It has droids, blasters, ships, wing-fighters, x-wings that are all flyable with first-person cockpit and working radar, planets with structure, storm troopers, even Kylo Ren’s lightsaber and the BB8 astromech droid from the new movie.”

And, of course, characters that are representative of R2D2, C-3P0 and Chewbacca. There’s even a Corellian merchant selling hyperdrives (Han Solo).

Activities including exploration, resource-gathering, crafting and combat play out on planets like the arid Tatooine, the ice-world Hoth, and Endor with its Ewok villages. Coming soon: the densely forested Wookie homeworld Kashyyyk, as well as Yoda’s hangout on Dagobah.

All shown in 32-by-32 resolution using voxels, or volumetric pixels, for the cube-based 3D graphics of Minecraft.

“To mod it you need to decompile it, put your own functions on it … you need a very deep working knowledge of Java to change things,” Miller said. “You have to know how to make your own code, rendering engines, methods, classes, functions and more.”

At last check, the duo had released Build 1.2.10, including patches and fixes suggested by users, and they are planned out until 1.8.

Dr. Huihui Wang, Chair of the Department of E ngineering, isn’t surprised at the accomplishments and contributions of Miller. He is president of the JU chapter of the National Society of Professional Engineers, and co-presented with student Jonathan Maywood at the 2015 National Conference on Undergraduate Research (NCUR), discussing their research on the “Design, Fabrication and Characterization of a 3D Printed Ukulele.”

“Weston is a self-motivated and diligent student,” she said. “He has developed some 3D modeling skills and has designed several prototypes with JU Lego (Mindstorms NXT robotics programming). He is also active in co-curricular activities.”

Miller credits his Star Wars mod experience for giving him a deeper interest in programming, and he plans to switch majors to computing science at JU, where he said he’s enjoyed his educational experience so far.

“I do think what we’re doing is pretty cool, and I figured, ‘I can do this,’” said Miller, who would like to work as a 3D designer in the automotive or aerospace industries. “Overall, I like JU and its small class size, and the teachers, all the science and math faculty, have been very relaxed, and open to helping and to just hang out with. We all support each other. I like the community here. There are a lot of smart people.”