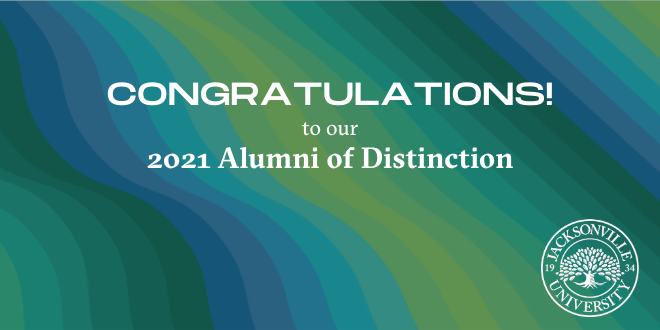 “After virtual homecoming events in 2020, we are so excited to honor these amazing alumni in person this year at our kickoff celebration in Swisher Gym” said Lauren Griffith, Senior Director of University Advancement. The University is presenting the awards Friday, Oct. 8 at 7 p.m. during Phin Phever presented by Baptist Health.

Award winners are nominated by their peers. They are Jacksonville University graduates demonstrating significant professional accomplishments, community and philanthropic engagement and continued support of their alma mater.

Marty Chomiak and wife Cindy were college sweethearts here at JU, and today they are household names on campus. Marty earned his B.S. in Marketing and Management and his MBA from Jacksonville University. He enjoyed a long and successful career at some of the largest companies in the world, including Proctor & Gamble and Johnson & Johnson. He retired from J&J after more than 34 years of working there and founded 30 North Explorer, a healthcare consultancy focusing on marketing, strategy, and corporate valuation. Marty currently serves on the Davis College of Business Executive Advisory Board, the Career Management Advisory Board, and is a founding member of the Friends of JU Rowing Advisory Board.

Cindy earned her B.S. from Jacksonville University, majoring in Psychology and Management. She also earned a College Counseling Certificate with distinction from UCLA and a Certificate in Natural Foods Cooking and Holistic Nutrition from The Natural Gourmet Institute for Food and Health in New York, NY. She is passionate about education, which has led her to volunteer in public schools, coordinate after-school programs and serve on community boards and parents councils. Cindy is a Certified Educational Planner (CEP), a designation considered the highest standard in college consulting, and is founder of Educated Decisions, an organization designed to help families navigate the complex college admissions process. She has visited over 450 colleges and universities worldwide and uses this expertise as the Vice-Chairperson of JU’s Board of Trustees. She is also a member of the Public Policy Institute Minority Scholarship Advisory Board and is a Legacy member of the Women’s Giving Alliance in Jacksonville.

Salem Hassan is a native of Jacksonville and worked in his family business, Suncoast RV, from 1988 until the business was sold in 2011. In 2015 Salem founded Travelcamp RV, one of the top five largest RV retailers in the Southeast. As its President, Salem has successfully expanded the business to seven current retail locations in multiple states with eight additional locations slated to open within the next year. Additionally, he launched RVCarePros.com in January of 2021 — a first-of-its-kind professional mobile RV service operation. Salem attributes JU to providing the perfect environment for balancing his studies with his career goals.

Salem is married to Alana Hassan and has two children at Jacksonville Country Day School (JCDS). He enjoys traveling in his RV and abroad with his family, as well as making music in his spare time. He has been an active participant with Native Sons and Daughters with his daughter, Harper for six years, and he and his wife enjoy contributing to organizations such as the Children’s Home Society, Dreams Come True, and Wolfson’s Children’s Hospital.  Additionally, Salem serves on the JCDS Board of Trustees and the JCDS business council.

Dave Rock was one of the founding members of Jacksonville University’s first club lacrosse team. You’ll recognize his name from the Rock Lacrosse Center, home to JU’s nationally-ranked men’s and women’s lacrosse programs, thanks to a generous gift from the 1992 JU grad.

Dave has more than 25 years of circulation, publishing and marketing experience. He formerly worked as a senior vice president at M2 Media Group for 14 years, where he oversaw business development, account management, publisher relations, fulfillment operations, customer service and some areas of M2’s Fundraising Business. Prior to M2, Dave was vice president of circulation at Ziff Davis Media, where he presided over Electronic Gaming Monthly, Computer Gaming World and Official PlayStation Magazine. Dave was also a member of the Magazine Directors Advisory Committee (MDAC) and ran for a Magazine Director seat in 2005. Folio Magazine named Dave to its “Top 40 Most Influential People in the Industry” in 2006. Before joining Ziff Davis, Dave was a national sales director at Zinio Systems, a leader in digital magazine and marketing services. He was also director of publisher relations at Synapse, a division of Time, Inc., where he co-founded freebizmag.com, a leading distributor of business and trade publications.

During his time at JU, Dave was president of Phi Delta Theta, an active member of the SGA, and he served as an RA. Dave currently resides in Fairfield, Conn., with his wife Elisabeth, his two children, John and Ainsley, and step daughter Caroline.  He spends his time coaching Fairfield Youth Lacrosse and is engaged in several start-up businesses.

During her time at JU and in the short number of years since graduating, Audrey Moran has accomplished many firsts. She was the founding member and vice president of JU’s Sporting Clays, Skeet and Trap Team, the founding member of the GOLD Phin Society, and she is one of the youngest members to ever serve on the University’s Board of Trustees. Her father, Andy Francis Moran, served on the JU Board of Trustees from 2006-2015.

Audrey is currently a Personal Insurance Division account director for Harden, one of the Southeast’s leading insurance, risk management, and employee benefits firms. She is an active member of the Riverside Rotary Club which honored her with their Rising Star Award in 2018. Audrey has also served the Angels for Allison Artist Series, the 2017 “Fries With That Wine” event hosted by the Red Shoe Crew of Jacksonville and Ronald McDonald House Charities of Jacksonville, and the 2017 American Cancer Society’s Cowford Ball. As a JU legacy graduate, Audrey earned her bachelor’s degree in Business Management where she joined Alpha Delta Pi. In 2018, she was honored to deliver the invocation and benediction at JU’s Graduate and Undergraduate Commencement Ceremonies.

She started her military career as an enlisted sailor in 1991. Her first official assignment was at Naval Security Group Activities (NSGA) Northwest in Chesapeake, Va., where she was promoted to Petty Officer Second Class and accepted to the Enlisted Commissioning Program to become an officer. Kim completed her undergraduate degree in Electrical Engineering from Florida A&M University while assigned to the NROTC Unit as an Officer Candidate. Upon graduation and commissioning, she was assigned to her first ship: the USS KEARSARGE (LHD-3), where she served as the Main Propulsion Division Officer in charge of running the ship’s engineering plant.  Kim also served as Deck Division Officer and earned her Surface Warfare designation. She went on to serve as training officer on the USS GONZALEZ (DDG-66), where she was the most senior ranking female onboard a ship’s company of more than 300.  Both of these assignments included several deployments overseas to the Mediterranean and the Persian Gulf.

After successful completion of two at-sea tours, Kim was assigned to Jacksonville University as a NROTC Instructor, responsible for advising 70 JU juniors in the NROTC Unit. Kim also taught Seamanship and Navigation while assigned to the NROTC Unit, and quickly became involved in JU’s campus culture as sports committee member and assistant cheer coach. She went on to serve on the USS GETTYSBURG (CG-64) out of Mayport and became the first-ever Executive Assistant at U.S. Fourth Fleet, where she was involved in the international response to Haiti’s devastating earthquake in 2010. Kim’s final tour was at US Central Command, at MacDill Air Force Base, serving under General “Mad Dog” Mattis in Tampa as a Maritime Operations Planner before heading back to Jacksonville to retire.

Whether detaining pirates, interdicting drug runners or providing air defense to carriers, Kim’s at-sea deployments were anything but boring! But after 21 years of thrilling service to her country, Kim says her time at Jacksonville University’s NROTC Unit was one of her most rewarding assignments.

Jacksonville University is an engine for progress and innovation, and Chuck and Cami Wodehouse are the rocket fuel propelling us forward. Their generous investment and steadfast partnership with Jacksonville University continues to advance our mission and drive the success of our students and faculty. Although the Wodehouses are not traditional alumni of JU, they are adopted into the Dolphin family and are part of the very fabric of our institution.

Chuck served as president of the former University Council, was the initial Chairman of the Davis College Executive Advisory Board, and served for 18 years on the University’s Board of Trustees. He continues to serve on several advisory boards across campus including the Public Policy Institute Board of Advisors, Master in Public Policy Minority Fellowship Board of Advisors, and continues to serve as an Emeritus Board Member of the Davis College of Business Executive Advisory Board.

The Wodehouses were instrumental in creating the ASPIRE scholarship program, the Master in Public Policy Fellowship Program, MSRI’s floating classroom called the Larkin, and so much more. Wherever there is a need, the Wodehouses are quick to help make a way. In humility, they are not driven by the public recognition of their generosity, which has far surpassed the six-figure mark and continues to grow. Rather, their support is rooted in their belief in the limitless potential of Jacksonville University and its students, and by their ability to envision what’s possible.