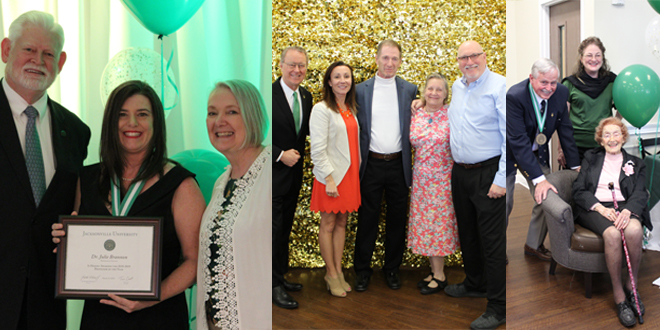 JU 2017-2018 Professor of the Year, Dr. Nisse Goldberg, Associate Professor of Biology and Marine Science, said, “Being recognized last year by the faculty here, those I consider my peers and highly esteemed, is one of the most meaningful accolades I could receive as an educator.” Goldberg, and now Brannon, are numbered among the ranks of esteemed JU faculty honored since 1958, Robert G. Woodhouse, Professor of Philosophy and Humanities, being the University’s first recipient. This year, the slate of talented and diverse finalists included Dr. George Hall, Resource Professor of Finance and Accounting; Dr. Ray Oldakowski, Professor of Geography; and Dr. Tim Snyder, Associate Professor of Music.

“I am absolutely blown away. It’s very humbling to feel the support and recognition of my peers,” Brannon said. She earned her doctorate degree from Florida State University, specializing in British Modernism and the works of James Joyce. Beyond her classroom endeavors, she has also been published in multiple journals and regularly makes research presentations at regional and national conferences. Two unique contributions of Brannon’s to the University are the founding of the Certificate in Editing program and the Women’s and Gender Studies Minor.

“JU is poised to take its place on the national and global stage,” Brannon said. “I believe the liberal arts and sciences become more critical to shaping a global citizenry every day, and JU is really gaining steam as a tremendous player in molding our next generation of leaders.”

Many other members of JU’s stellar faculty received recognition at the annual gathering in the newly re-imagined Riverview Dining Hall located in the Kinne Student Center, a namesake of JU’s Chancellor Emerita, Dr. Frances Bartlett Kinne who was also in attendance.

Faculty Awards for Excellence in…

Retiring this year are Professor of History, Dr. Craig Buettinger, after 35 years of service, and Dr. Lynnette Kennison, Professor of Nursing, who has served in JU’s Brooks Rehabilitation College of Healthcare Sciences since 2003.

Dr. Henry Rinne, Dean of JU’s College of Fine Arts also announced his retirement this year. Having served in higher education for nearly forty years, Rinne is now looking forward to spending more time with family. The College of Fine Arts (CFA) has flourished under his leadership with increased enrollment in all undergraduate CFA programs over the past three years and the complete renovation of Terry Concert Hall, including the installation of a monumental glass sculpture, to name only a few of his many accomplishments as dean.

Transitioning from the Office of the Provost, Dr. Donnie Horner will be returning to his first love—teaching. Horner will return to full-time professorial duties in the JU Davis College of Business (DCOB), once again joining the body of colleagues for whom he’d served as advocate. Pursuing a desire to increase his availability to family members in need of care, his transition is effective June 1. President Cost said, “Donnie has been a true ambassador for our University, a well-recognized leader in the Jacksonville community for nearly a decade, and his service to JU has been exemplary.”

Since joining JU in 2009 as a Professor of Leadership in the DCOB, Horner accepted a unique two-year assignment in Jacksonville’s City Hall as Education Commissioner, served as the University’s first Government and Community Affairs Officer, and became Director of Athletics in 2014. His tenure as Provost beginning in June 2016, oversaw many academic accomplishments for JU, including but not limited to, the launch of “OCEARCH at Jacksonville University” in February 2017, opening of “JU Downtown” in October 2017, the early concept work for the JU Graduate School, and the establishing of JU’s new Office of Research and Sponsored Programs.

“I want to thank our President, Tim Cost, for trusting my ability to lead in a variety of capacities over the last several years,” Horner said. “I’ve truly relished my roles here as utility in-fielder.”