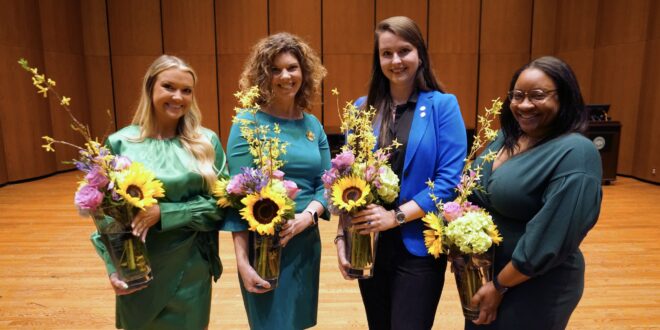 2022 Woman of the Year honorees announced

Sixty-five outstanding women from across the Jacksonville University campus were recognized at the 2022 Women’s History Month Celebration & Award Ceremony as nominees for the annual Woman of the Year awards.

It’s the capstone event of Women’s History Month on campus, which included guest speakers, an admiration station, campus-wide pink out and a women’s necessities drive.

Four women were named Woman of the Year in their respective categories in the March 24 ceremony in the Terry Concert Hall, which featured performances from the Jacksonville University RiverTones, Choral Union and Jeilymar Morales ‘22.

Morales was the 2021 Frances Bartlett Kinne Student Woman of the Year, which is an endowed award that includes a $500 scholarship. Known for her many accomplishments, unquenchable optimism and selfless service to others, Kinne embodied the true spirit of the University’s Woman of the Year honors.

The ceremony was the first since 2019 that held a full audience in the Terry Concert Hall.

Here are this year’s honorees:

Caroline Grant was named the 2022 Student Woman of the Year. She is a junior majoring in communications and triple minoring in marketing, professional sales, and Spanish. Grant captains the JU Dance team, serves as vice president of member experience for the Delta Delta Delta sorority and serves on several campus boards including the Student Athletic Advisory Committee, Board of Diversity Awareness and the JU Experience Improvement Team. Daughter of 2020 Faculty Woman of the Year Shelley Grant, nominators say she’s followed in her footsteps.

“I see Caroline as an unsung hero that works hard to bring out the best in everyone,” a nominator wrote. “Pandemic or not, she has been determined to make the best out of this year’s performances and always gives 100% to her team. Academically, I could not be prouder of Caroline, especially knowing the number of hours she gives to the Sirens, her sorority and her job as a fitness instructor and personal trainer. Caroline is truly a role model for young women, and I believe she is so deserving of this award.”

“It is so great to see that the apple didn’t fall far from the tree, so to speak,” a nomination read.
“Caroline is so involved with not only sports and social organizations, but she also still maintains honors and academics as a priority. What a great role model for all young people attending JU. A perfect example of if you believe in yourself, all your dreams and success will come true.”

Warner Buchman is the 2022 Graduate Student Woman of the Year. A dual Master in Public Policy and M.S. in Marine Science student, Buchman graduates in May with important work awaiting her. She’s currently employed by the U.S. Army Corps of Engineers as a biologist, working on the Central Everglades Planning Project aimed at restoring the ecosystem, the world’s largest such project. She will continue her work there following graduation. Her thesis focuses on the policy impact on catch-per-unit-efforts of lionfish in the U.S. and Bahamas.

“Warner has been part of a number of research and leadership projects on campus and is one of the most articulate, humble, and ethical people you’ll ever meet (and of course, has a killer sense of humor),” her nomination form read. “She has supported the Institutes in various marketing and public relations projects and willingly devotes her time to raising the profile of the University (she does that by just being a student!). I am proud to be a colleague of hers, and am so excited to see where she goes in the world.”

Patrice Abner was named the 2022 Staff Woman of the Year. Now the University’s Director of Equity and Inclusion, she joined the staff in 2017 as the first Director of Student Inclusion. Abner is tasked with developing training and educational opportunities for the campus community, supports international students and assists the Office of People & Culture. Abner spearheaded the development of the Student Inclusion office when she arrived on campus, and continues to oversee it.

“She is a strong, effective advocate for diversity, equity and inclusion,” her nominator wrote.
“Patrice’s excellent critical thinking and interpersonal skills, and desire to contribute to the betterment of our campus in specific and meaningful ways make her worthy of this award.”

“Patrice goes above and beyond for an office of one person. She is dedicated to her students and is always helping them solve whatever problems they have,” a nomination read. “She is a great person to be around and is the heart of student life.”

Dr. Tamara Bentley Caudill is the 2022 Faculty Woman of the Year. She is the chair of world languages and an assistant professor of French. Known to her students as “madame,” Dr. Caudill teaches courses from elementary French to upper-level courses in Contemporary France and Fairy Tales and Folklore of France. Her research specializes in medieval and early modern French literature, theatre and performance and visual cultures.

“In my work alone I have had the opportunity to hear how students rave about her, before getting to work with her myself,” her nominator wrote. “Dr. Caudill truly represents what it means to be an outstanding and satisfactory woman leader and figurehead at JU.”

“Dr. Caudill has devoted countless hours to her students,” a nomination read. “She works with the whole student, attending to them inside and outside the classroom as a professor, advisor, and mentor.”

Here are all the nominees:

Graduate Student Woman of the Year

Staff Woman of the Year

Faculty Woman of the Year