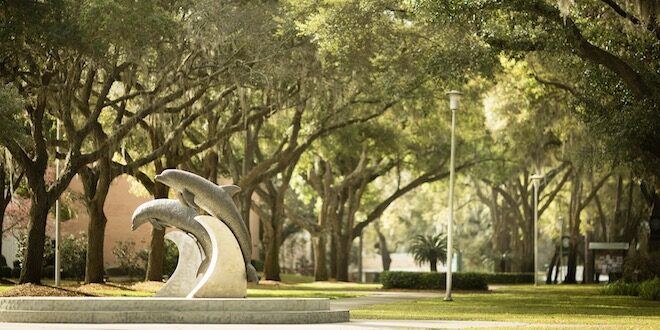 2021 has been a year of growth, accomplishments and positive change at Jacksonville University. As we wrap up another year, here’s a look back through some of the top stories from 2021.

For the third year in a row, Jacksonville University earned a spot among the top regional universities on U.S. News & World Report’s annual list of Best Colleges and celebrated three consecutive years of the best rankings in school history. In addition to the top university recognition, JU was honored for its nursing and business programs, diverse student body and the value of its academic programs.

On May 23, the Jacksonville University community gathered to honor the life and legacy of Chancellor Emeritus Dr. Frances Bartlett Kinne, who passed away May 10, 2020, at the age of 102.

Dr. Kinne devoted 62 years of service to Jacksonville University and the surrounding community, In 1979, she became the first female university president in Florida, establishing the Davis College of Business, the Keigwin School of Nursing and the University’s aviation program.

Her bronze statue was unveiled in Kinne Plaza, and the plaza was dedicated that day. Guests were able to explore The Kinne Legacy Exhibition in the Alexander Brest Gallery, which detailed the extraordinary life of Dr. Kinne.

Students started classes at the Jacksonville University Palm Coast location in the fall, marking the first group to begin their degrees at the newly-opened location.

Jacksonville University sailing team member Charlotte Rose decided just one win at the College Sailing Women’s Singlehand National Championship in 2021 wasn’t enough. Following her win in April, Rose followed it up with another in November, making her the first in JU history to win two national sailing championships.

Shortly after her second national championship win, she won a silver medal in the Junio Pan American Games in Cali, Colombia.

After graduation in the spring, she has her sights set on the 2024 Olympics in Paris.

Mincy joined the team from the University of Florida, where he was assistant coach for six seasons. Mincy was named the top assistant coach in the country on ESPN’s 40 under 40 list in 2020. He brought a wealth of Division I basketball knowledge to the program.

Brown, a 1990 men’s basketball alumnus, went on to play and coach in the NBA, and work in player development for several NBA teams. Brown is tasked with serving as a Jacksonville University ambassador in the community, attending events, engaging with passionate supporters of JU programs in an effort to expand financial support, as well as assisting in the recruitment and retention of students at Jacksonville University.

In the fall, Jacksonville University unveiled five new schools within its four colleges, an updated roster of program offerings and responsive support services.

The planning process, led by senior leadership, faculty and staff, took place over more than a year. The result was designed to better serve students and the industries that hire them.

The Schools of Engineering and Technology, Business, Aviation and Military Sciences, Art & Design, Social Sciences and Education and Sciences and Mathematics were among those added this year, bringing Jacksonville University’s total to 11 distinct schools at its historic riverfront campus.

Following the announcement of the program in February, the first cohort of the 12-month, accelerated bachelor of science in nursing students started classes in the fall. In partnership with Baptist Health, the second-degree program allows qualified students to complete their degrees in a year with a work-promise agreement from Baptist Health upon graduation and licensure.

The students began their first clinical rotations in November at two Baptist Health hospitals in Jacksonville.

In just five days in February, 6,397 Dolphins came together and donated more than $2.4 million as part of Dolphin Dash. It was the most the university has ever raised as part of the campaign, centered around powering forward and challenging others to invest in JU.

In March, Senior Vice President and Athletic Director Alex Ricker-Gilbert was one of four in Division I-AAA to receive the Athletics Director of the Year Award (ADOY).

The ADOY recognizes athletics directors at all levels for their commitment and positive contributions to student athletes, their campuses and surrounding communities.

Ricker-Gilbert is in his fifth year with Jacksonville University.

For the first time in Jacksonville University’s 87-year history, each of its four colleges held its own graduation ceremony. This allowed graduates to be recognized in person, and to have room for social distancing.

After positive feedback from graduates and families, the new format will return in 2022, with four ceremonies planned for May 8 and 9.

Per JU tradition, all ceremonies were held on the beautiful oak-lined Science Green. Each ceremony had a separate commencement speaker, tailored to the college’s graduates.

Jacksonville University announced a transformational agreement in July to bring a K-12 IDEA Public Schools location adjacent to campus, creating a pre-k through doctorate education hub in the heart of the Arlington neighborhood.

IDEA Jacksonville purchased a tract of land immediately south of campus and plans to begin classes in Fall 2022.

Master of Respiratory care program announced and begins next year

In an effort to respond to future workforce needs, Jacksonville University launched a Master of Respiratory Care program, the only graduate level program of its kind in Florida.

Jacksonville University is partnering with Rush University to develop and deliver the two-year program, which will begin in 2022.

The program will offer leadership and advanced practice preparation in multiple areas, including critical care, neonatal care and cardiopulmonary diagnostics.

November saw the launch of Connected, an educational program aimed at raising awareness about the St. Johns River as a vital resource.

The partnership with JAXPORT will offer Jacksonville University’s scientific expertise and educational resources to further the Connected mission at local schools and community groups. Marine Science Research Institute faculty will provide lectures, activities and resources for educators on topics related to the St. Johns River.

Thanks to a generous gift from the Zimmerman Family Foundation, Jacksonville University created the Zimmerman Scholars Program in April.

It pairs scholarship recipients from the Davis College of Business with leadership development opportunities to create an individualized co-curricular program devoted to developing young leaders.

The first cohort of 15 undergraduate students started in the fall.