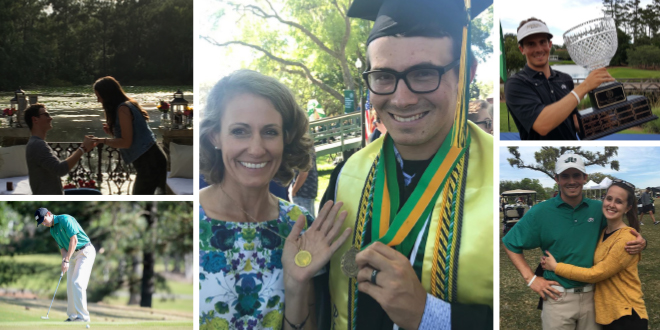 When Samuel Uhland ’19 stepped on stage at the Jacksonville University Baccalaureate Commencement on April 27 to receive the Fred B. Noble Award, the University’s most prestigious academic award, it had already been a momentous morning. Samuel led the faculty and graduate processional alongside his grandfather, Dr. S. Walker Blanton, professor of history, Commencement senior marshal, and 51-year member of the Jacksonville University family – a special family moment and a testament to both Samuel’s and Doc Blanton’s contributions to the JU community. Samuel was the first graduating senior to help lead the Commencement processional.

With the receipt of his gold Noble Award medal during the ceremony, honoring his cumulative four-year 4.0 grade point average, Samuel forged a special link with another member of his family: his mother, Kristi Uhland, who won the same Noble Award on her graduation day 25 years ago.

Samuel said of being the second generation of award-winning Uhlands “There’s a legacy there, a history that our family has there, and it really is special that I get to add my name to that and share something with my mom that can’t be taken away.”

Samuel is no stranger to the high-wire balancing act that accompanies high performance. In addition to maintaining his 4.0 GPA through a rigorous double major in finance and accounting, Samuel was a four-year team leader on the Division I Dolphins men’s golf team that regularly finished in the top three at the ASUN Conference Championship and qualified for the 2017 National Championships. He was just the second Dolphin to be named to the ASUN Conference All-Academic team. While at JU, Samuel remained active in his church as a middle- and high school youth group counselor and even found time to date and marry his wife, Jessica.

A Jacksonville native, Samuel grew up aware of his family ties to Jacksonville University – in addition to his mother’s and grandfather’s connections, both his aunt and uncle attended the University. But his family encouraged him to explore all of his options as he excelled academically and on the golf course. “My mom mentioned [JU] when we were starting [the college search process] but she never pressured, she just said it’s here if you want it,” Samuel recalled. He remembers visiting campus with his grandfather as a child, but didn’t spend much time at the University as an adult. “But then once I became familiar with it, I realized that’s where I wanted to be.”In high school, Samuel cultivated the balance between academics and athletics that would help fuel his success at JU. He studied at the Providence Extension Program, which combined self-directed study in a homeschool environment with classroom learning with other students and tutors. All the while, Samuel was practicing and traveling to compete in high school golf tournaments. Once he committed to Jacksonville University, he stopped playing high school golf and instead played in several junior tournaments while prioritizing his school work.

This high degree of independence and flexibility served him well in the transition to college life. “I was probably about as well-prepared as I could have been coming in to college. Even so, there’s a learning curve and you have to hit the ground running to figure out what works for you and what doesn’t.”

Learning the strategies to keep his energy high was critical to achieving his own academic expectations.  “My mom had told me before I went to school at JU that she had received this award because she had gotten a perfect 4.0 [GPA]. I knew it wasn’t necessarily something everybody did, but I didn’t think it was that big a deal because my mom said it so nonchalantly and I had done well in high school. So I thought, ‘Oh this is just what you’re expected to do.’”

For his first two years at JU, Samuel succeeded in his classes and maintained straight As. Then, during his sophomore year, the Jacksonville University Men’s Golf team qualified for the National Championships for the first time in the program’s history. At the event, Samuel was honored with another prestigious academic award: the NCAA Elite 90 Award, given to the player with the highest cumulative grade-point average at each NCAA National Championship.

“When I won that award,” Samuel says, “it started to dawn on me that [a 4.0 GPA] was a big deal and this isn’t something that everybody does. At that moment, I fell into some of my hardest classes ever and really had to push through. As soon as I realized how special it was, it got really hard.”

Samuel credits many of his professors and advisors with helping him navigate the difficult class load, maintaining his high grades while continuing to perform on the golf course. He believes the small campus and low student-to-faculty ratio at Jacksonville University supported the interaction and growth that allowed him to excel. “There are so many people I’m going to look back fondly on, as I remember all of the things they’ve done for me.”

One of Samuel’s greatest advocates is his coach, Jacksonville University Men’s Golf Coach Mike Blackburn, who has become a friend and mentor on and off the course. Blackburn touted Samuel as the full package, saying, “Samuel has been a model student-athlete over his time at JU: as a student, he carried an amazing 4.0 GPA through graduation. On the course, Samuel strengthened our lineup as soon as he arrived as a freshman. His passion for the game of golf allowed him to progress to a high level, shooting many subpar rounds for the team. Samuel is a natural leader and always had a word of encouragement for his teammates.”

Despite the ease of his transition to from high school golf and his success on and off the course in college, Samuel’s dream of becoming a professional golfer shifted after experiencing the grueling NCAA travel schedule. “College will teach you whether or not that passion and fire you have is enough. I learned that as much as I love golf, I don’t think a profession of it is really where I’m supposed to be. I still have dreams and goals – I still want to play in the Masters, I still want to play in the U.S. Open.  Golf will always be a part of my life.”

Samuel has always approached his education – and his life’s work – with a deep sense of purpose, recognizing that many young people do not have the same access to educational opportunities as do he and his classmates. He reminds his fellow college students that their position is one not to be taken for granted: “Even though sometimes it’s frustrating or like you have the weight of the world on your shoulders and you feel like you’re trying to figure everything out, just remember it’s a privilege to be where you are.”

Samuel plans to take this philosophy of gratitude into his next challenge: ministry. He will matriculate at Gordon-Conwell Theological Seminary this fall in pursuit of his Master of Divinity degree.