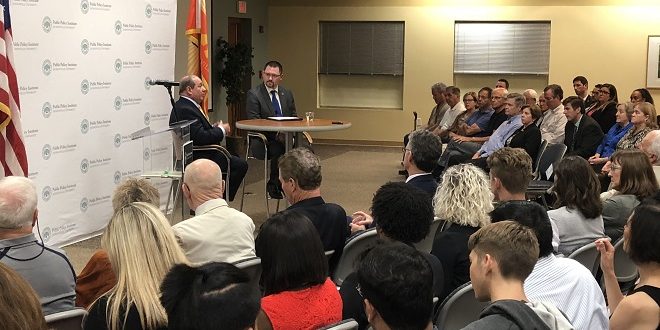 Students of public policy and other guests discussed the complexities of U.S. sanctions, diplomacy, and foreign policy tactics in North Korea and Iran. The Nov. 8 lecture given by Dr. George A. Lopez of the University of Notre Dame marks the Sixth Annual Hesburgh Lecture.

In partnership with the Notre Dame Club of Greater Jacksonville, the Jacksonville University (JU) Public Policy Institute (Institute) annually hosts the Hesburgh Lecture and reception, bringing experts from Notre Dame University to speak on areas of public policy . While designed to give JU students direct access to policy experts, all Hesburgh Lectures are free and open to the public.

The Rev. Theodore M. Hesburgh C.S.C. Chair and Professor Emeritus of Peace Studies at the Joan B. Kroc Institute for International Peace Studies, Lopez is a leading expert on economic sanctions, peacebuilding, and various peace-related issues, and has held advising roles with the United Nations, the Carnegie Council on Ethics and International Affairs in New York City, and the Academy for International Conflict Management and Peacebuilding at the U.S. Institute of Peace (USIP) in Washington, D.C.

Last year in Baltimore, Lopez received the “Distinguished Scholar Award” from the International Studies Association and in his 30 years at Notre Dame, won a number of teaching awards, including Notre Dame’s “Media Legend” award. With more than 50 articles and book projects on sanctions credited to him, Lopez now writes frequently for The Hill regarding Iran and North Korea policy.

Diplomacy & Sanctions in a Complex World

With U.S. midterm elections concluding with the Republicans holding the Senate and the Democrats taking the House of Representatives, most experts believe that President Trump’s policies regarding the Korean Peninsula will not change. However, some say that recent moves to withdraw from the Iranian nuclear deal and the reimposing of economic and financial sanctions on Iran could place pressure on President Trump to seek a diplomatic victory. The most likely option for such a milestone is negotiations on North Korea’s nuclear weapons.

“This is one of our most pressing foreign policy problems,” Lopez said. “Can we use tools like economic sanctions to deter the prospect of major powers holding nuclear weapons or to give up ones they currently hold and to assure that we do that under the condition of diplomacy and humanitarianism? Under what conditions do sanctions work and why?”

Sanctions, he says, are often called “the middle ground” between the words of diplomacy and the act of war. Lopez offered a historical overview of when and where sanctions have worked and what he would advise going forward. He describes the “foreign policy toolbox” and explored the logic of sanctions in states trying to achieve an objective. According to Lopez, the goal is changing the cost-benefit ratio, entering into negotiation bargaining and ultimately, regime change.

“This is a powerful tool in a post-1990’s economy for denying broad scale resources to a target. Sanctions in the old days were all about constraining imports and exports, but in a world of massive movement of capital, people, semi-finished products, and even elicit trade of everything from people to uranium, sanctions are an effective way to shut down an economy, assuming you have coordinated agreement from imposers.”

The Institute works to bring policy expertise, like that of Lopez and past annual Hesburgh speakers, directly to students. Because the Institute believes that public policy touches every part of life, it also teaches that policy—whether foreign, federal, state, or local—matters.

Faculty and staff of the Institute seek to shape the future of cities, states, and the nation through the Master in Public Policy (MPP) degree program.

Six years ago, Jacksonville University President Tim Cost, Public Policy Institute Director Rick Mullaney, the Institute’s Board of Advisors, the JU Board of Trustees, and community partners worked together to create the Institute and the first MPP program in Florida.

Here, graduate students are prepared for leadership roles in public, private, and non-profit sectors with skills in analytics, communication, management, governance, leadership, and diplomacy. Skills that Lopez and other foreign policy leaders and advisors greatly value and hope to instill in today’s students.