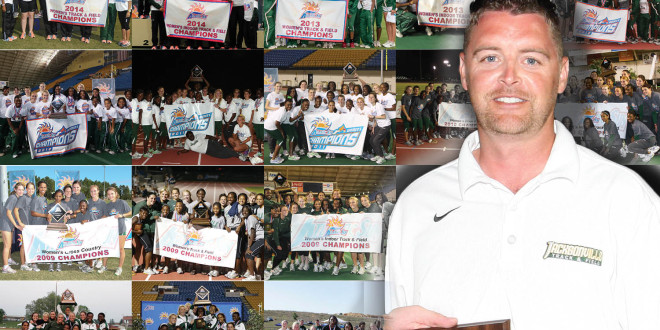 The most successful track & field coach in Atlantic Sun history is sure to call Jacksonville University home for several more years as Director of Cross Country/Track & Field Ron Grigg was signed to a five-year contract extension.

“I am grateful that President Cost and Dr. Horner believe in our program and in me,” said Grigg who has coached well over 100 individual conference champions during his JU tenure. “I look forward to continuing to work hard for them, for the university, and for our student-athletes.”

Grigg has made the Dolphins track program a beacon in the Atlantic Sun Conference by winning both the A-Sun Indoor and Outdoor Championships in each of the last nine seasons – earning “Coach of the Year” in all 18 of those titles. He was also given the distinction for cross country in 2009 when he led the Dolphins to the only triple crown in A-Sun history sweeping the women’s cross country, indoor and outdoor titles.

“We are thrilled to have Ron for another five-years as the Director of Cross Country/Track & Field. He is a role model for all of those wishing to serve in the coaching profession.”

The high achievements have followed the program into the classroom. The Dolphins have earned USTFCCCA All-Academic Team recognition for 13 consecutive years (2002-14) while producing nearly 400 A-Sun All-Academic performers. Also, the cross country, and indoor and track teams have received NCAA Public Recognition for having an APR in the top 10% nationally the last several years.

“Jacksonville University has afforded our student-athletes a unique environment that combines private university academic excellence with the opportunity to compete at the highest levels of NCAA Division I athletics in a near perfect climate and locale for the sport of track and field,” Grigg added. “Our student-athletes have seized those opportunities, and created their own successes in their sport and in their academic lives.”

For more on the JU Dolphins, visit judolphins.com.