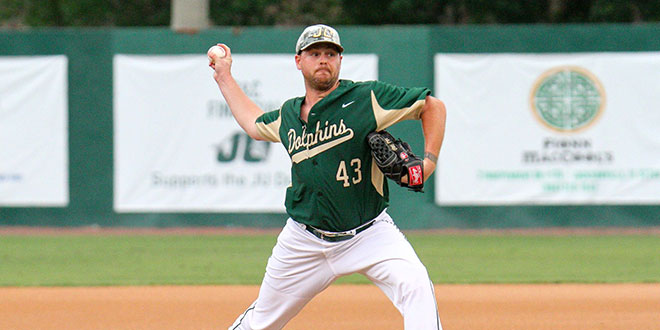 The moment last spring was bigger than the game of baseball for Brian Holcomb. The freshman pitcher and Navy veteran made his collegiate start.

Serving in the Navy for more than 15 years after high school, Holcomb was cleared through the NCAA and became a student-athlete last spring, earning a spot on the Dolphins’ roster. Fulfilling the 35-year-old’s lifelong dream, head coach Tim Montez gave him the ball to start the game against visiting Georgia Southern.

“We were excited and proud to give Brian Holcomb the start,” Montez said. “It’s the least we can do for a young man who has served his country with pride and unwavering dedication.”

Holcomb is currently working on his nursing degree at the University so he can return to service with more knowledge to serve his country. 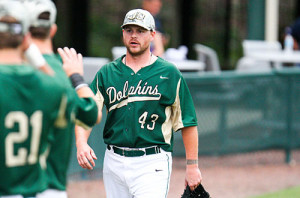 “It was an emotional experience for me,” Holcomb said after his first game. “With everything I’ve been through physically and mentality, just to be able to compete with these guys is a blessing.”

Enrolled in the Navy Nurse Corps Association (NNCA), Holcomb’s life ambitions go beyond the sport of baseball and through the stratosphere of selflessness.

“I was accepted into the Medical Enlisted Commissioning Program (MECP) here at Jacksonville University,” Holcomb said of his decision to enroll as a student-athlete.“ After I get my degree, I’ll have the chance to serve for six years. I love serving my country. If I can do 40 years serving and retire, that’s what I want to do.”

A member of the Wounded Warrior Project, Holcomb’s return to the mound comes some 17 years after his last level of competition, when he starred at Mason High School in Michigan. At Mason, he owned a 4-1 record with a 1.90 ERA and 37 strikeouts his senior season before graduating and enlisting in the service.

“Brian has always had the dream of playing Division I college baseball,” Montez said of Holcomb. “He earned a roster spot this season and he has been such an inspiration to our players and has had a positive impact in our clubhouse.”